From The Brighton Toy and Model Index
(Redirected from Spot-On)
Jump to:navigation, search 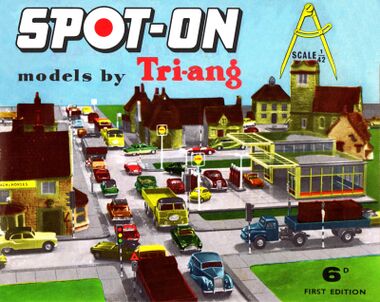 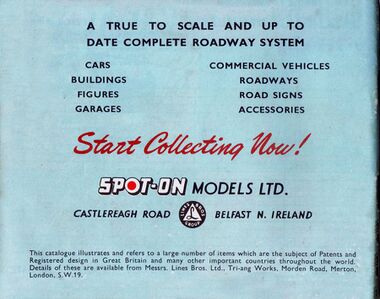 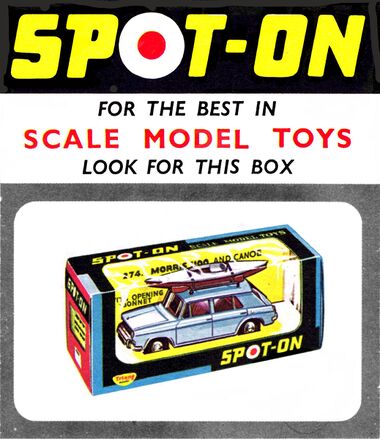 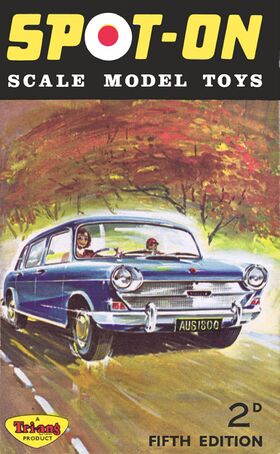 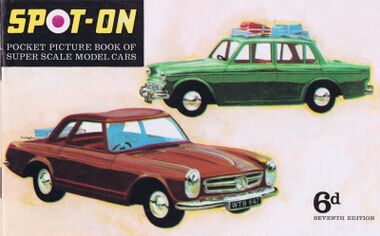 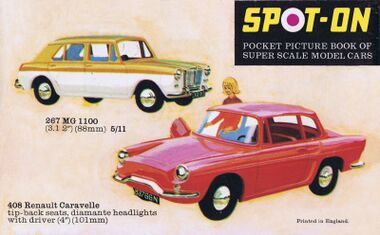 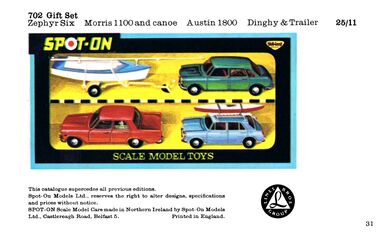 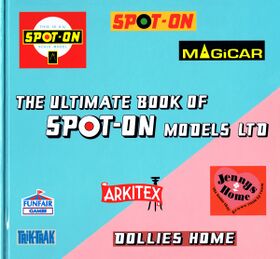 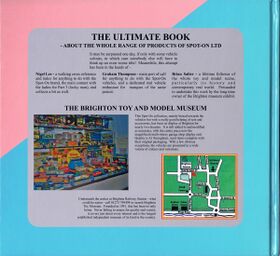 Back cover of "The Ultimate Book of Spot-On Models Ltd", by Nigel Lee, Graham Thompson and Brian Salter [image info] 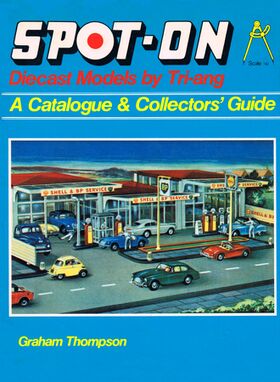 Tri-ang Spot-On (or Spot-On Models) was primarily a range of diecast metal toy vehicles with plastic interiors, produced by toymaking behemoths Lines Brothers (brand-name "Tri-ang") at their Castlereagh site, Belfast, between 1959 and 1967. This was a high-quality range whose production ended shortly after the Lines Brothers' acquisition of Dinky Toys. The Spot-On marque was also used on contemporary building construction sets and roadway sets made at the same factory, for a range of dollhouse furniture made at the same site with the same technologies, and for a range of rubber moulded accessory buildings launched at around the same time, but made in Wimbledon.

Lines Brothers' range of manufacturing techniques and the plastics and diecasting facilities at the Castlereagh factory made it comparatively easy for the company to support Spot-On with accessories, which included roadside signs and people, garages and petrol stations, and the plastic Arkitex modern building construction sets (which were available in 1:42 and 00-scale). The third major Belfast Spot-On sub-brand (after the vehicles and Arkitex) was a range of 1:16-scale Spot-On dollhouse furniture (later rebranded as "Jenny's Home"), which like the cars, used a mixture of diecast metal and injection-moulded plastic.

An anomaly was the 1:42-scale Spot-On "Cotswold Village" range of moulded rubber buildings, which although designed to work with the new Spot-On vehicle range, and advertised in the vehicles catalogues, were actually made by a rubber moulding company in London that Lines Brothers had recently acquired, rather than in Belfast.

Although the Spot-On range must have been quite expensive to design and launch, it wasn't in production for very long because of a restructuring of the Tri-ang product range that took place after Lines Brothers took over their struggling competitor Meccano Ltd in 1964.

Since Meccano Ltd made Dinky Toys, the takeover left Lines Brothers with two competing diecast model car brands, and rather than continue with the premium Spot-On range and kill off the more established Dinky Toys brand (which, after all, they'd just paid to acquire), the company found it easier to discontinue Spot-On (in 1967) and concentrate on Dinky. A few unreleased Spot-On designs then ended up in the Dinky Toys range as "Dinky" pieces.

It would probably have been difficult keeping the Spot-On brand going once the flagship range of products - the cars - had gone, and the initial association between the name and Castlereagh became less of an asset when the company were shutting down Castlereagh production lines and considering moving remaining production elsewhere. The Arkitex range was another casualty of the 1967 rationalisations, with one lone Arkitex-based building appearing in the Triang Railways catalogue, without Spot-On or Arkitex branding.

The museum's display of Spot-On vehicles was in the dedicated Spot-On cabinet, which held a guest collection of around 250 Spot-On vehicles and perhaps a hundred or more small accessories such as figures and road signs, the largest permanent public display of the range anywhere in the World.

The following 32 pages are in this category, out of 32 total.