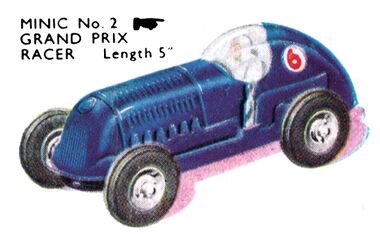 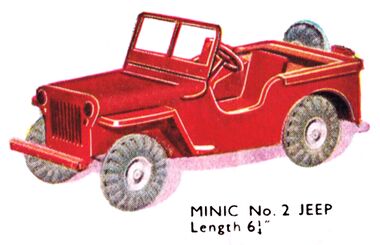 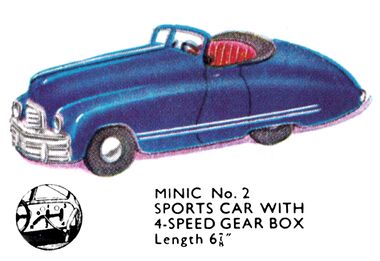 The first of the Tri-ang Minic "Series II", "Second Series", or "No.2" range started to tentatively appear in advertising in the very late 1940s, starting with the No.2 Grand Prix Racer. By 1950 there were enough cars to justify calling it a "range" ("Series II"), which continued expanding through 1951.

The Minic Series 2 were plastic-bodied and larger than the original range of painted tinplate Minics, and tried to add ambitious additional features wherever possible, such as sound, or – in one case – a working four-speed gearbox for the clockwork motor.

The range replaced the short-lived Tri-ang Penguin plastic-shelled rubber-band-driven cars of the late 1940s, with the larger size allowing more experimentation with complex internal mechanisms. At around the same period, a few smaller plastic-shelled cars also quietly snuck into the "standard" Minic range.

A new range of magnificent scale model cars – larger than those illustrated on left or overleaf – and with many exclusive MINIC features.

Each car is fitted with a new type clockwork motor for long runs at high speed and many incorporate the "auto-stop" units which stop the wheels when the model is picked up. With the exception of the No.2 Jeep which is all-steel, the Series II models feature detailed moulded bodies in a wide range of colours. Chromed radiators, bumpers and decor are fitted.

It’s a fact – you can buy one of these wonderful MINIC Series II scale models right now for this amazingly low price! They are all true scale models of modern cars and have a “power-plus” performance that is unequalled by any other make. Their long runs at terrific speed re made possible by the exclusive Tri-ang motors – each of which is specially designed for the job.

Other features include the smooth, aero-styled bodies; the correctly tracking steering and the tough, treaded rubber tyres.

Look for the name MINIC on every carton – insist on MINICS – they’re tops.