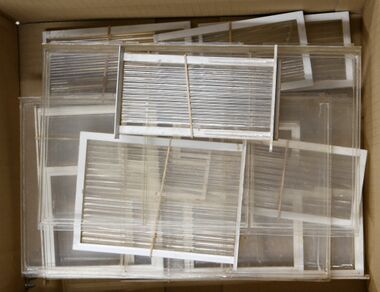 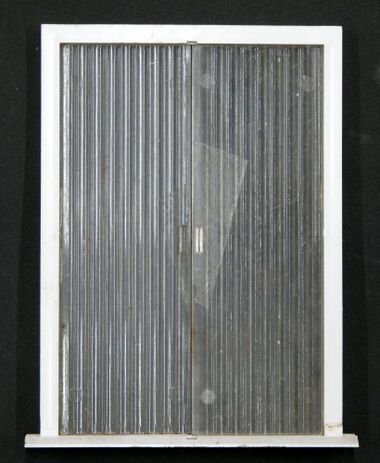 The Spot-On range of 1:12 scale dollhouse fittings seems to have appeared in around the 1960.

This seems to be the first time that Tri-ang had sold window and door fittings for use by DIY dollhouse constructors.

The doors and windows were sold in clear polythene bags with folded card headers. Branding was predominantly Triang, with a very small Spot-On logo -- the pieces were apparently produced by the Spot-On plant in Belfast, but didn't adhere to the Spot-On philosophy of having all items made from a mixture of plastic and metal parts.

The range had two themes: catalogues show a Georgian Front Door, and a choice of three Georgian window styles, all shown in the catalogue in yellow, and a range of seven "modern" ("Contemporary") white-framed doors and windows.

It is the distinctively-1960s "Contemporary" fittings that are chiefly remembered, as they made possible a range of dollhouse styles that were otherwise difficult to implement.

The Contemporary window options consisted of a choice of two "room" windows, a "2+1" double window and a wide three-pane window set (both of which had opening windows), and a classic low-profile wide non-opening double-window of the type typically used in garages to allow in more light.

The most distinctive piece, though, was the three-panel Contemporary Large Panel Window, which could either represent an exterior glass-panelled wall, or (when used on the ground floor or in a bungalow), a set of glass sliding patio doors (although this piece was a single piece of clear plastic with no moving parts)

As well as selling the components separately to people who wanted to build their own dollhouses, retailed, in card-headed plastic bags with the Spot-On logo, Tri-ang also incorporated the the Contemporary series fittings into some of their modern dollhouses, specifically the single-block Bungalow A and three-block Bungalow C, and the two-storey Dollhouse U and Dollhouse V.

Made of plastic, most of the range had frames with an internal and external retaining "lip" that overlapped a little with the wall. In order to be able to be fitted, these window and doorframes were "split down the middle", creating two halves that clipped together to form a "sandwich" with the clear central panel(s).

This had the happy result that (as with real window and doorframes), if the actual cutout hole was a bit messy, the nice clean frame hid the edge of the cutout, giving a perfectly clean result as seen from both sides.

As shown in a catalogue

Our rebuilt Tri-ang Bungalow A has been slightly redesigned to act as a showcase for the "Contemporary" range of fittings, and includes examples of every piece, in context.

We do not currently have any examples of the "Georgian" range.