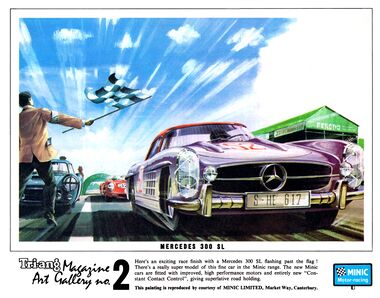 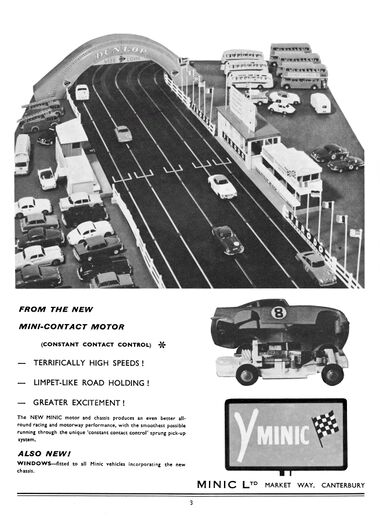 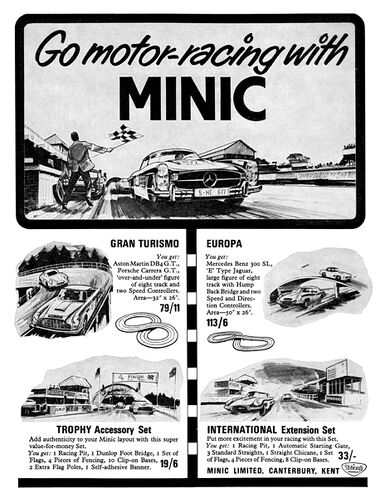 Of course, if you wanted to add other Minic Motorways parts, and race double-decker buses around a Le Mans racetrack, you could ...

Contains Ford and Ferrari GT Cars, 2 Hand Controllers, 2 Track-Mates with 10 ft (305 cms.) of Track which makes up into an up-and-over figure of 8 layout with a large fast loop and a tight bend to test out skilful drivers. Complete with track support piers. You are the driver. With practice you can make the cars scream around the track at astonishing speeds. You can make up your track in a variety of ways. You can add extra track and many accessories and hazards for greater excitement. And everything is miniaturised so you can do this in a smaller space than you would have believed possible.

Contains Ford and Ferrari GT Cars, 2 Hand Controllers, 2 Track-Mates with over 5 feet (150 cms.) of Track in the form of an oval. Two Crossover Tracks give this race game extra excitement, the cautious driver will often be able to beat his opponent on the race track.

This is MINIC'S big-value, big track set with two superb new models of two great cars! Chevrolet's fast, low Stingray matched against Ferrari's fabulous Superfast in the race for the Golden 500 Trophy! With the cars comes a big twisting track designed to test your skill as a racing driver! The Golden 500 track makes up into five different, exciting layouts that will give your racing plenty of variety!

different versions of this set came with different cars

Here's a top value set to start you racing! Two of Europe's fast, high performance cars plus a neat, compact track. Race Aston Martin's stylish DB4 against the streamlined, rear-engined Porsche Carrera GT for the Silver Eight Trophy! The track is a compact over-and-under figure-eight with a tough chicane at the Bridge Bend, or it can be laid out to form a "Kidney Loop" layout.