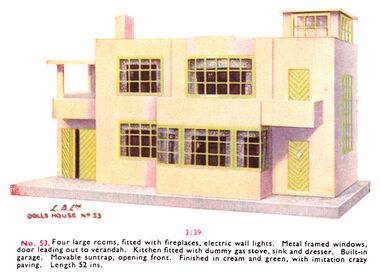 As specialists in large wooden toys (such as rocking-horses), the earlier company of George and Joseph Lines had been a significant supplier of dollhouses, and when Walter, William and Arthur Lines set up the separate Lines Brothers company, with the brandname Tri-ang, they continued the dollhouse tradition, absorbing G&J Lines in 1931.

Tri-ang were responsible for producing a large proportion of Britain's dollhouses through the 1930s through 1950s, with the "Stockbroker" house (No.72/93) appearing to many small children as the ultimate unobtainable fantasy dollhouse. Rescuing and restoring old Tri-ang dollhouses has now become "a thing" – for people who grew up in this period, finding a mangled old Tri-ang dollhouse that matches one they had – or perhaps one that they never had but wanted – and restoring it to its former glory, can be a satisfying hobby.

Tri-ang's degree of organisation in numbering their houses makes it easier for enthusiast groups to share information on specific models, and the sheer number of dollhouse models that Triang put out means that once you're bought one old Tri-ang dollhouse, it's awfully tempting to start collecting more ...

This is a listing of the Triang dollhouse catalogue images that we have so far, sorted by number for easier identification.