From The Brighton Toy and Model Index
(Redirected from Hamleys)
Jump to:navigation, search 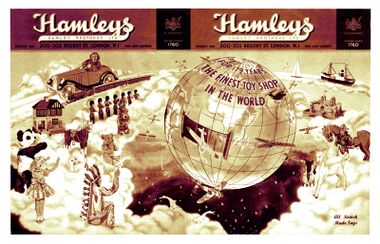 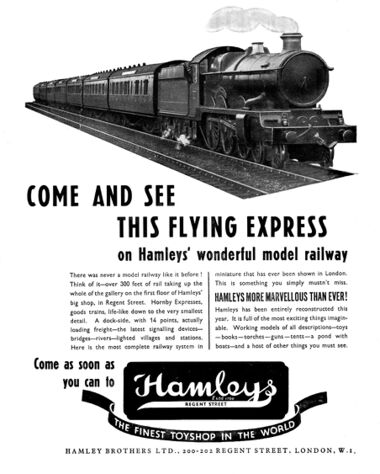 1931: "Hamleys has been completely reconstructed this year" [image info] 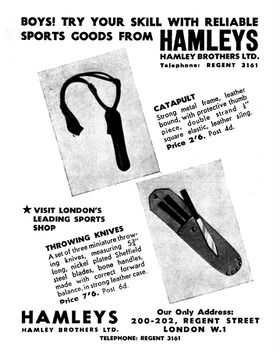 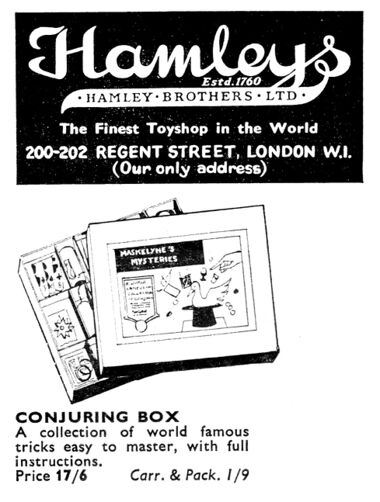 Hamleys is Britain's most famous toyshop. Although the company has multiple outlets in the UK and abroad, in the UK the name is often considered to be synonymous with the seven-floor shop at the top of London's Regent Street, with its red, white and black toy soldier sign hanging outside.

With seven floors, Hamleys is a popular tourist attraction in its own right.

Hamley's opened a branch in Regent Street, Central London in 1881 (near the current site), and ended up filling six floors.

In 1931 the company got into trouble, the shop closed and the receivers were called in.

At the time, Lines Brothers (owners of the Tri-ang brand) were the shop's biggest creditors, and Walter Lines felt that the opportunity to add a prestigious retail outlet to their range of toy manufacturing businesses was to good an opportunity to miss. Walter knew toys and the toy industry inside out, and after polling Lines Brothers' toymaking competition to make sure that Hamleys being owned by Lines wouldn't alienate the shop's other suppliers, Walter argued the case to the rest of the Lines Brothers board, and L-B bought the shop and reopened it, the same year.

An enthusiastic adopter or modern business practices and streamlined production, Walter cut the number of Hamleys shops to just the Regent Street flagship, and bought regular advertising space for Hamleys in Meccano Magazine. In sympathy with the promises that Walter had probably given to the other main British toy manufacturers, the Hamleys buyers had full discretion to buy whatever stock they thought would sell, from whatever supplier ... and part of the reason for having so much shop space was for the shop to offer an unrivalled range of products ("Whatever you want, Hamleys have it") ... however, it's fair to say that the Lines Brothers Tri-ang range was well represented in Hamleys, both in the shop and in the shop's advertising.

Having their own independent shop gave Lines Brothers an extra "ear to the ground" for what else was going on the toy industry – if Hamleys were buying and selling quantities of a competing product based on it being perceived as being better, or better value for money, then Lines Brothers would have a better chance of finding out early, and changing the product and/or its pricing.

It was also important for Lines Brothers that Hamleys remain open - a distinguishing aspect of the Lines Brothers/Triang product range was that it contained a lot of physically bulky items – pedal cars, dollhouses and the like – which smaller toyshops might have trouble stocking and displaying in any significant quantity. With Hamleys' massive display space, a parent wanting to browse a wide range of pedalcars for a possible Christmas or birthday present might make a beeline to Hamleys on the assumption that if a ride-on toy vehicle was available, Hamleys would have it (or could get it).

... the acquisition of Hamleys was of course pre-war and that was way back. This of course was a very well known name at that stage, and when it became obvious that the Hamley family was no longer able to run it successfully my father decided that it would be a good idea, and so he actually wrote to the other retailers and manufacturers and asked whether they would mind if we acquired Hamleys, and they said no they wouldn’t, they’d like to see it continued. And so it did and it became, of course, there’s a famous statement by Queen Mary, “It’s the finest toy shop in the world”. And that is, of course, where my sister Peg became involved because she ran Hamleys for some years ...

Starting in May 1933, Hamleys started a newsletter, which was distributed as a printed full-page advert in Meccano Magazine (which Lines Brothers were already advertising in). 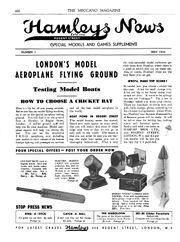 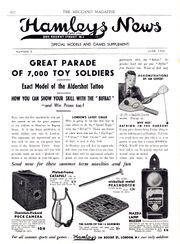 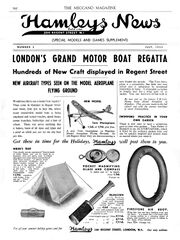 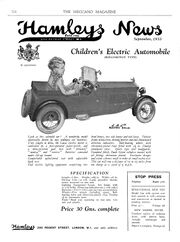 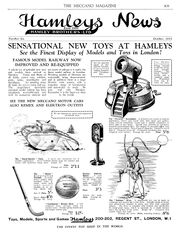 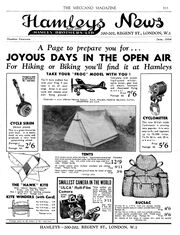