The model has a white and black body and yellow funnel. 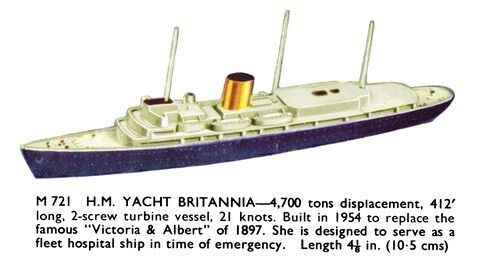 This model along with HMS Alamein and HMS Jutland make up the HMY Britannia Boxed set, catalogue number: M894.

The Royal Yacht Britannia was built as replacement for the obsolete Victoria and Albert, with the order placed in February 1952 with John Brown & Co Ltd. The Clydebank yard won this contract largely because of its experience in building the prestigious Cunard "Queens", and the RMS Caronia.

Britannia was designed to be a dual function vessel – as a Royal Yacht in peacetime and as a hospital ship in times of hostility. Triang Minic also made a model of the Britannia in its wartime paintwork which can be found on the wiki here