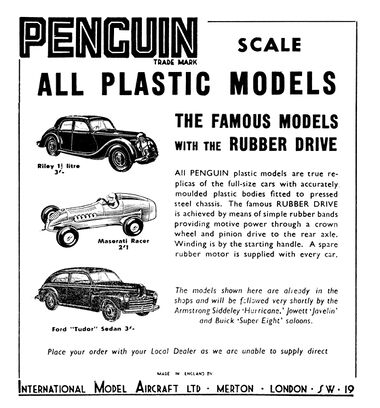 1948: Penguin ... The Famous Models with the Rubber Drive [image info]

The Penguin range of rubber-band-driven plastic-shelled model cars seem to have had a comparatively short life, apparently appearing in Meccano Magazine advertising for the first time in around 1948, and gone by ~1950.

The cars represented Tri-ang subsidiary IMA's experiment with branching out from plastic model aircraft kits and plastic model boats, to road vehicles. The range seems to have finished quickly, perhaps not necessarily because the cars were bad, but because it became clear that these sorts of plastic-shelled cars would be better fitted with clockwork motors, and Triang already had a brand for clockwork-motored cars, Minic.

Nowadays the Penguin cars are best remembered as the origin of the next-generation plastic-bodied Minics of the 1950s, and especially of the larger-scale and more extravagant "Second-Series" Minics that appeared in around ~1950.

It is difficult to know if all the Penguin cars mentioned in advertising were actually produced, but those advertised with pictures include:

" All PENGUIN plastic models are true representations of the full-size cars with accurately moulded plastic bodies fitted to pressed steel chassis. The famous RUBBER DRIVE is achieved by means of simple rubber bands providing motive power through a crown wheel and pinion drive to the rear axle. Winding is by the starting handle. A spare rubber motor is supplied with every car. "