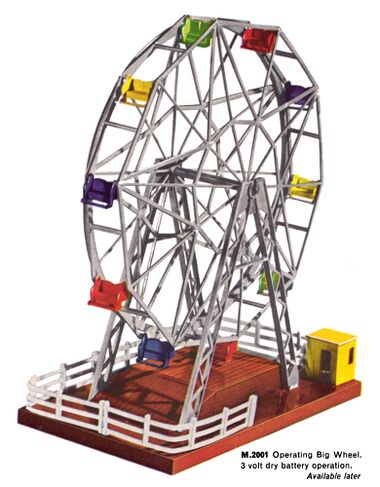 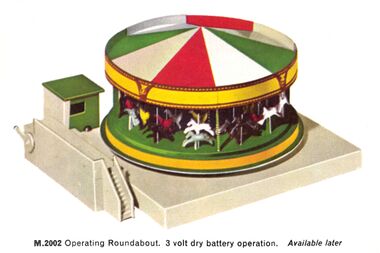 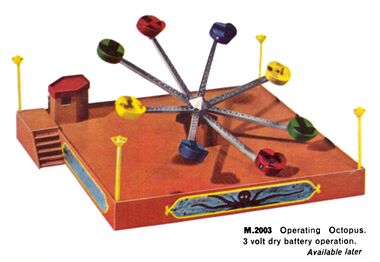 The Minic Motorways Fairground or fun-fair is an odd one: it appears in the 1964 Tri-ang Railways 1964 catalogue (listed as "available later"), but an internet search for the pieces throws up nothing concrete, so it might well well not have ever been released.

... and now Minic Motorways bring the colour, music and all the fun of the fair to the trackside of miniature motoring. A flick of the switch and the Roundabout, Octopus and Big Wheel turn into life, while traditional fairground melodies tinkle across the scene.

It's not obvious why a funfair should count as a road accessory. However, the sheer randomness of a funfair makes it a useful addition to a layout: the fact that funfairs have a habit of appearing temporarily in fields means that the owner of a model railway of road layout, left with an empty space to fill, could plonk a set of funfair rides in it, leave the rest of the space open, and achieve a reasonably natural looking result, without needing paths or other infrastructure. The job of populating a space with a factory or a set of buildings would require much more care with regard to designing the layout: one would have to decide where the road and foot access was to the properties, whether the houses should have fencing separating them from each other and from the road, whether they have gardens, and so on (terraced housing is much easier to set up but requires long rectangular plots).

A fairground is also an eyecatching novelty addition to a section of scenery, due to the traditional use of high contrast bright colours designed to draw attention. if the case of the three Minic pieces, all three were battery-powered to provide more motion and activity to a layout, and judging from the catalogue description, at least one of the pieces must have had its own audio playback of jangly fairground music.

It's also possible that Tri-ang may have felt that they had to at least try to "make a go" of making fairground pieces for Minic Motorways, because the closest range – Faller's – was known for including a successful line of fairground, funfair and playground pieces.

1964/1965 was an odd period for Lines Brothers, as the company's product line was being restructured to absorb parts of Meccano Ltd., which had recently run out of money and was in the process of being taken over by Lines Bros. With the Hornby Dublo product range being reduced to a fraction of its original size, rationalisation of the merged "Tri-ang Hornby" product line would have suggested some sacrifices to be made from the Triang side, too. The 1964 catalogue includes a few "available later products that were either delayed longer than expected or didn't appear at all (the Model-Land airliner?), so perhaps the fairground was another casualty.

It was perhaps a little ambitious to put these not-quite-ready products into the catalogue at all, but it's possible that this might have been done partly as a "statement of intent" to improve the morale of the designers who were working hard on these products and who might have been upset at the suggestion that their beloved toys might not ever appear.