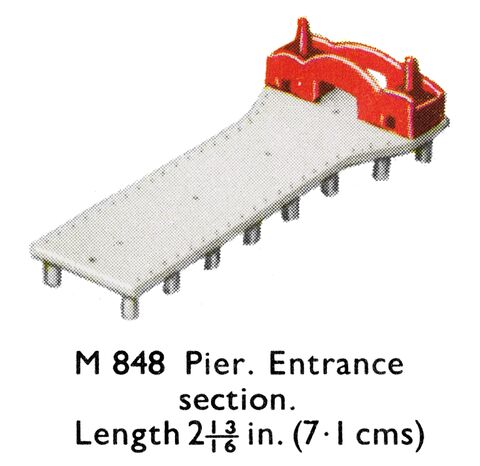 The section is similar to the 847 Entrance Section, except that its width flares wider at one end, and had an extra pair of holes to accommodate the red diecast entrance, which represents an ornamental central archway flanked by two spired buildings.

Inexplicably, Triang gave the location holes for this red ornamental entrance a fractionally different spacing to those of the green shelters that fit along the spine of the pier: since the red entranceway is symmetrical, it would have been nice to have the option of placing one or more along the centre of the pier as ornamental structures designed to make the pier look glamorous from the side (just as Brighton Palace Pier has its name in lights on the front, but also on the sides) ... but the designers chose to make these two location holes perhaps a millimetre-and-a-half further apart. Hmph.

The Entrance Section can be used without its superstructure as the plain outer end of a more "functional" pier, with the flared end being a location for boats to tie up alongside.