The R.248 Ambulance Car first appeared in the Tri-ang Railways catalogue in 1963, and later appeared as part of the Tri-ang Hornby "Battlespace" range.

An Ambulance Car was an odd (but not unwelcome) addition to the range. Its main purpose in 19635 seems to have been to allow a set of otherwise fairly random-looking novelty wagons to be assembled into a meaningful set. A slightly unpretty bright red diesel shunter loco, pushing a snow-plough (which looked cool but had limited play value), hauling the helicopter launcher wagon was a pretty wierd setup ... but add an ambulance carriage and the set became the RS.38 Snow Rescue Set, and suddenly everything made sense. 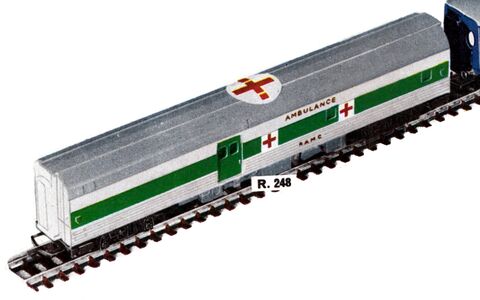