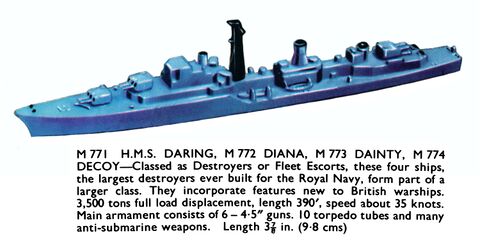 HMS Decoy was one of a batch of nine destroyers (the "D"-class, with names beginning with "D") that were launched in 1932 and completed in 1932 and 1933. The D-class (like the immediately previous "C"-Class) were intended to make up a self-contained flotilla of either destroyers, plus a ninth lead ship to provide command functions ... however, the "C"-Class order ended up being cut down to just five ships: Kempenfelt, Comet, Crusader, Cygnet, and Crescent.

Dainty H53 was sunk by a thousand-pound bomb dropped by a Junkers Ju 88 off the North African Coast in February 1941.