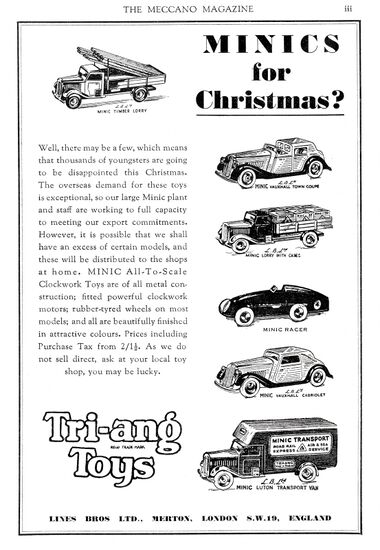 With World War Two breaking out in late 1939, late '39/'40 saw a sudden slew of military toy vehicles, followed by the petering-out of toy production through 1940/41 as toy companies were diverted to producing tooling and equipment for the war effort (with Lines Brothers, for example, famously designing and producing a revised version of the sten gun).

Although the war in Europe ended in 1945, full demilitarisation did not happen instantly, with troop concentrations in Korea remaining high through the late 1940s, in advance of the Korean War then breaking out in 1950.

As a result, metal shortages didn't cease immediately at the end of WW2, and some of the smaller lead toy manufacturers, who had been waiting and waiting to be able to restart production, simply gave up and sold their moulds to the larger companies such as Britains. Even after toymakers had restarted production, Britain's perilous finances (the country having effectively been bankrupted during the war) meant that it was now government policy that the production of nonessential goods should initially be targeted at the export market as a priority, as a way of paying down at least some of the national debt. This meant that even after British toy production had restarted, many of the lines were still not available to buy in Britain.

Companies that had been advertising during the war that they would be back once hostilities were over had to advertise that their customers would have to wait a little longer, with toy lines expected to become available in the UK only after the foreign export market had been satiated.

For many companies, the situation didn't start to return to something resembling normalcy until perhaps around 1948-49.

This category has the following 49 subcategories, out of 49 total.

The following 70 pages are in this category, out of 70 total.