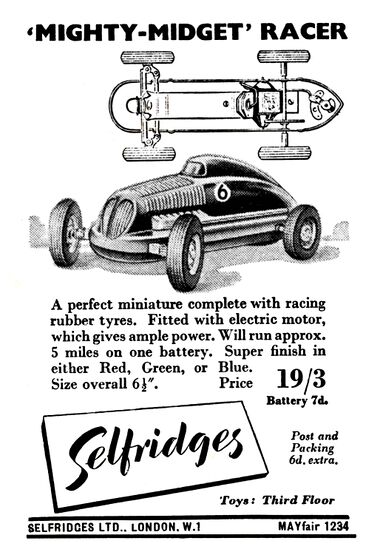 The battery-powered Mighty Midget Electric Racer was introduced by Victory Industries in the UK at the end of the 1940s. The car was a slightly stylised "fat" version of a classic 1930s racing car design, with a covered cockpit (to simplify the design), twin "nostril"-style radiator grilles, and a silver exhaust pipe running down each side.

The car seems to have been available in the racing colours of red, green (presumably British Racing Green), blue, and apparently silver (favoured by German teams from the late 1930s onwards).

The battery-powered toy had a metal shell and was driven by Victory Industries' Mighty Midget Motor. The toy did a lot to help promote the motor (which was also available separately), and although the car wasn't a slotcar, it would have been comparatively easy to convert into one for the early home-built slot-racing systems that were starting to appear in the late 1940s.

Even for more ambitious slotcar builders wanting to make their own bodyshell, or or wanting to adapt one from another toy car, the Mighty Midget Racer acted as an inspiration and a "proof of concept" – they knew that the motor was well suited for powering small electric cars, and could be fitted to a simple shell to make a commercial-grade product.

A perfect miniature complete with racing rubber tyres. Fitted with electric motor, which gives ample power. Will run approx. 5 miles on one battery. Super finish in either Red, Green, or Blue. Size overall 6½".