A bright red metal diecast clockwork streamlined Castoys single-decker bus in excellent condition, made by Mettoy 1948-1951. The base doesn't list a model number, but the numberplate has the identifier MTY 820 (where "MTY" stands for "Mettoy"). 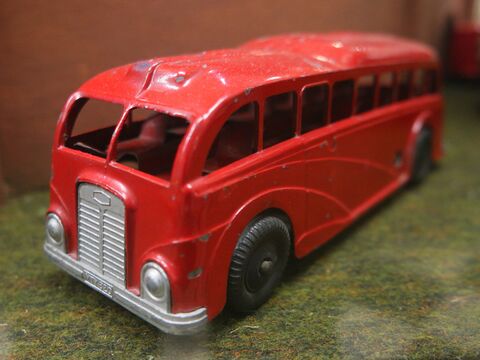 The bus has been positioned on the layout to show the left side, which has the hole for the clockwork winding key.

The bus is a nice example of the tail end of Mettoy's traditional metal-only output, well designed and decently detailed. In the mid-Fifties this range was eclipsed by the appearance of the new next-generation Mettoy-Playcraft range of diecast cars with plastic parts, Corgi Toys.

Almost all the other road vehicles on the layout are Tri-ang Minics.