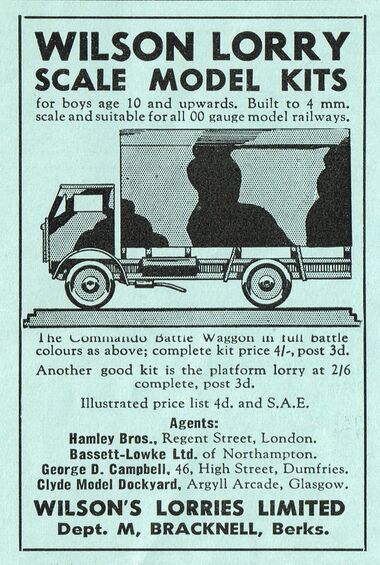 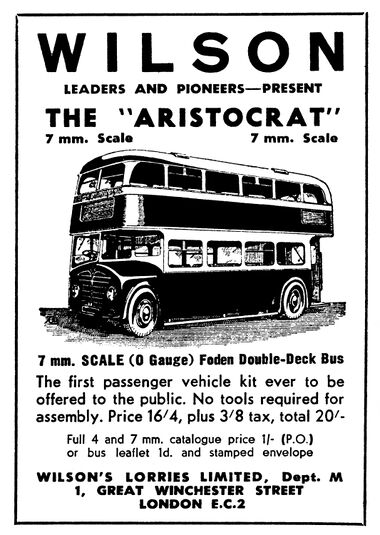 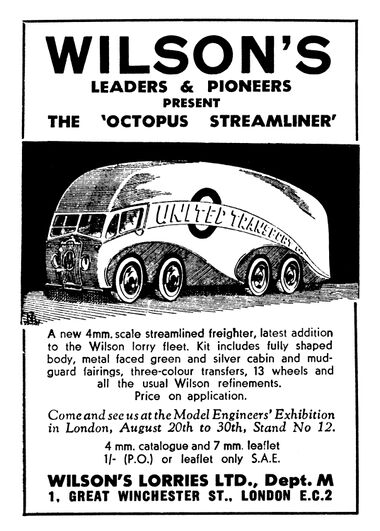 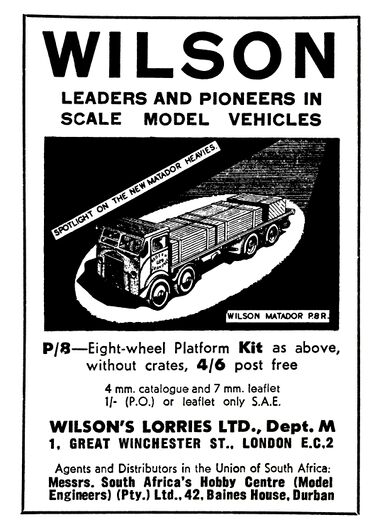 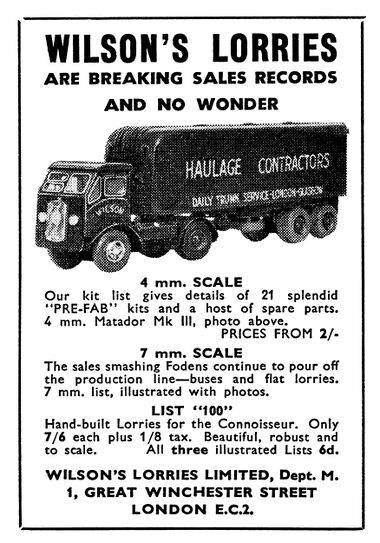 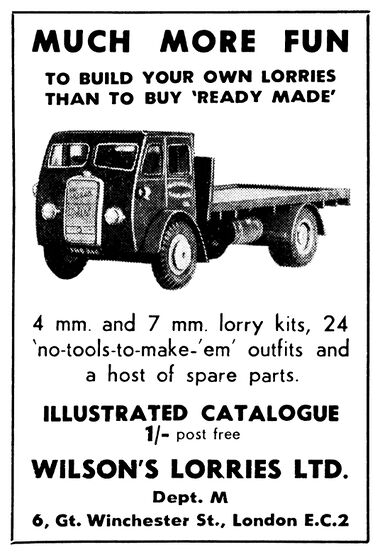 The Wilson Scale Model Lorries series of kits seems to have appeared in 1942, during World War Two, and consisted of wood, printed card and other parts such as foldable clear printed plastic film for the cab bodies.

Typically scaled at 4mm/foot to accompany the fairly recent (mid-1930s) 00-gauge model railways, the Wilson range (and the Modelcraft/Micromodels and ERG ranges) benefited from a lack of competition during the War as the larger toy companies had their premises turned over to war effort production, and also during and after the war due to the continuing restrictions on the supply of metal. Post-war austerity also meant that many modelling enthusiasts were looking for cheap options, and although modelling cars in cardboard in 4mm/foot scale might be fiddly due to the small size, lorries and double-decker buses were just about large enough to model properly. 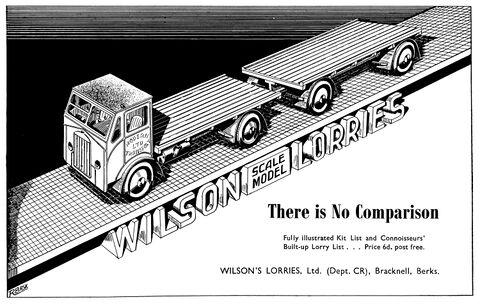 ~1944: "Wilson Lorries: There is No Comparison". Full-page advert from the back cover of "Cardboard Rolling Stock and How To Build It" (1944-), by E. Rankine Gray, edition undated.

In 1947, the company also offered a range of diecast addon components and accessories for 4mm and 7mm scale, such as steering wheels and petrol pumps, and the Wilson model of the quirky modern "Octopus" eight-wheeler streamlined lorry featured persistently in Meccano Magazine adverts through 1947 to 1949.

The series was designed and produced by D. Murray Wilson, who registered a patent application for the idea, and also registered the trademark "Printastruct" ... although this seemed slightly superfluous given the distinctiveness of the "Wilson's Lorries" name, "Printastruct" might have come in handy as a higher-profile name if Wilson had decided to branch out into producing other sorts of card models. 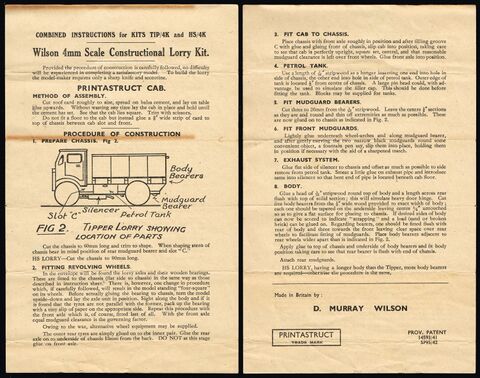 4 mm. workers are well catered for by the fine range of "Wilson Lorries", including accurate scale models of various types of lorries and vans, both complete and in the form of kits of parts for home assembly. The latest addition to the range is a single-decker bus. Various parts, such as wheels, cabs and detail fittings, are also available separately, so types of vehicle not included in the kits can be made up. The pre-war series of 7mm. vehicles has now been reborn in the form of a "Foden" 54-seater double-decker bus, a model of unusual interest, not only because it fulfils such a long-standing want, but because of the unusual completeness of the kit, containing over 70 shaped parts, ready to assemble.

The earliest mentions we've found of the lorry kits are from 1942, in an announcement in Country Life (Vol.91, page 542), which announces the kits and say that they can be obtained directly from the maker or via Bassett-Lowke Ltd, and in a January 1942 advert in Meccano Magazine.

Wilsons Lorries, Ltd., makers of scale-model lorry kits, hope to offer sports car kits in the near future. D. Murray Wilson, one of the directors, runs a 1925 "Chummy" Austin Seven and a Terraplane as his personal cars.