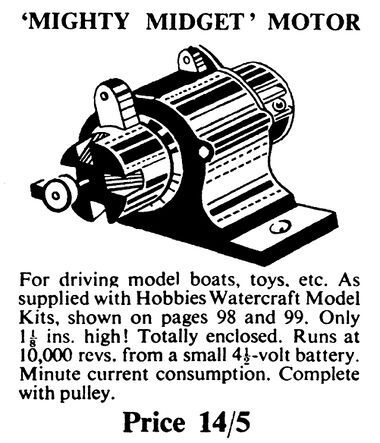 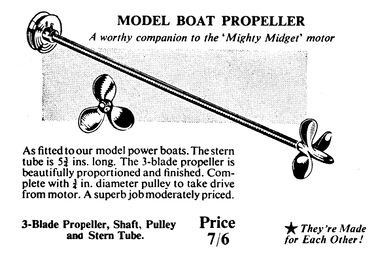 The Mighty Midget electric motor was a tiny three-pole motor produced by Victory Industries Ltd from the late 1940s. The motor was produced primarily for Victory's own model cars and boats, but was also sold as a separate item to the modelmaking community, distributed by Modelcraft.

When Victory closed its doors in 1969, the Mighty Midget motors were taken on by Wrenn, who repackaged them as Wrenn products but kept the name.

The Mighty Midget was one of the main "go-to" electric motors used in the UK in the early (late 1950s) days of rail-guided and slotcar racing, where enthusiasts still had to make their own cars. The Mighty Midget was "mainstream", easily available, and had already proved itself in the Mighty Midget Racer as being suitable for powering small lightweight model cars.

PROVIDED with a 12-to-1 reduction gear and a pulley, this British electric motor is designed for use in models and small control devices. The Mighty Midget(t) operates on a single flashlight cell, and its armature turns up to 10,000 r.p.m. on two cells. The permanent-magnet DC motor is reversible by a change of polarity. Distributed by Modelcraft Ltd., London, it is made by Victory Industries, Guildford, England.