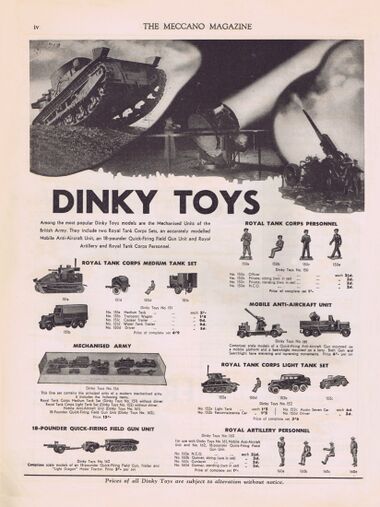 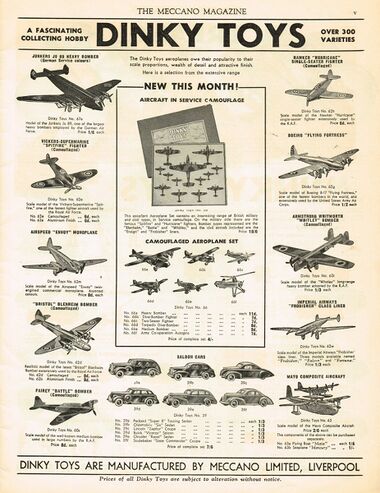 The 1940s represents a bit of a black spot for metal toys in general, in that the outbreak of World War Two (1939-45) shortly resulted in the shutdown of pretty much all metal toys, as factory space and materials were repurposed for war work, and metal toy production banned unless there was some special justification.

Dinky continued production for a little while after the War had started, producing some additional aeroplane models, new sets, and then, of course, re-releasing the existing military aircraft models in camouflage colours.

Dinky advertising space in Meccano Magazine started to shrink, eventually reducing to a slightly odd selection (which presumably represented the main unsold existing stock), and then disappearing altogether, with Meccano Ltd. presumably deciding that since the Magazine itself was also having to use a smaller number of smaller pages due to wartime restrictions on paper supplies, that it was better to devote the remaining limited advertising space to supporting their main brands, Meccano and Hornby, and let the "Dinky" advertising space be bought by other companies.

One notable product that the company produced comparatively late was the Spitfire pendant. This was a version of the Dinky Spitfire plane with a tail-loop that allowed it to be worn on a chain around the neck, or pinned on as a brooch. The selling-point of the Spitfire pendant was that it was used to raise money for a fund to buy a real Spitfire fighter aircraft, with all income from the model going to the fund.

Winston Churchill seems to have been a fan of the company's products, and there's a painting of WS playing with a large Meccano bridge, but eventually not only was the production of metal toys shut down, but also their distribution and sale. This was presumably to stop toy compnies sneakily continuing to make metal toys and selling them on by pretending that they were pre-war stock. With the banning of sale and distribution, the toymakign side of Meccano Ltd.effectively went into a state of hibernation and the company switched to war work.

With the cessation of the war in Europe in 1945, Meccano Magazine announced that "A limited supply of the smaller Meccano Outfits and a first installment of Dinky Toys will be ready during December", and notices in Meccano Magazine then advised customrs to try again during the month if they hadn't been able to get hold of any Dinkies in December, or January, or February, or March ...

The first dedicated (half-page) post-war advert for Dinky Toys appeared in April 1946, announcing "New Dinky Toys" / "Now ready!". These new models were the No.38c Lagonda Sports Coupé and the No.153a Jeep, although these initial models were apparently 1930s designs created before the war, but which hadn't been able to be put into production. The same two "New!" models were then advertised until August 1946, when they were joined by an Avro York (No.70a). It then took until October 1946 for these three new postwar models to be joined by another two "coming soon", the Jaguar Sports Car No.38f, and the Gloster Meteor Jet Fighter No.70e.

By December 1946 (over a year after the War had ceased), the total of new models had still only increased to seven, with the addition of the Tempest II Fighter No.70b, and the Armstrong Siddeley Coupe No.38e. This increased to eight in 1947, and October 1947, then saw the appearance of three new Foden and Guy lorries as Dinky Supertoys.

New Dinky Toy production ramped up over the next few years, but apart from some of the WW2-era planes and military vehicles, it was a decade that (until around 1948-1949) found it difficult to leave its mark on the product range, with many of the new cars being open-topped prewar vehicles (like the Jaguar SS100 which had ceased production back in 1940). Until the large agricultural vehicles and commercial vehicles started to turn up in 1947-1949, there wasn't much to distinguish most of the 1940-47 Dinkies from the Dinky Toys of the 1930s in terms of production and design.

The following 28 pages are in this category, out of 28 total.