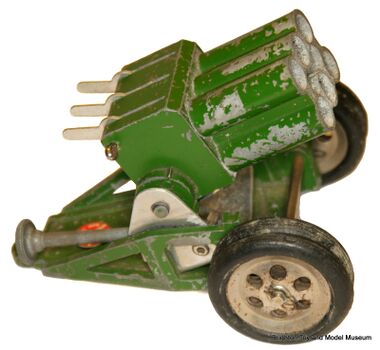 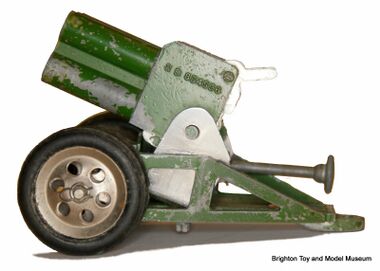 A green-painted metal Rocket Gun, made by Astra Pharos Ltd. in the 1940s.

Designed to be towed behind another military vehicle, the toy is mostly heavy green-painted cast metal, with some of the moving parts and joints executed in unpainted aluminium sheet. A bare metal screwshaft with a knurled cap allows the elevation to be adjusted via a worm gear, and while it appears to have two wheels, each of these is a stacked pair of rubber-tyred wheels, reflecting how heavy the original gun would have been.

On the upper surface of the base, towards the towing coupling, is a red disc with white lettering, reading "ASTRA". "MADE IN ENGLAND".

The gun has six chambers with spring-loaded plungers that can be loaded up with missiles. and there are three silver levers on the back, which via a clever pivot, each releases a pair of two missiles.

By modern standards, the toy would be considered totally over-engineered for its purpose – the toy uses an impressive amount of heavy diecast metal, and the wheels and levers are held in place with split pins to allow servicing.

This most spectacular gun can be used with or without caps. Fires single rockets or salvos of three or six. Supplied with 6 rockets. 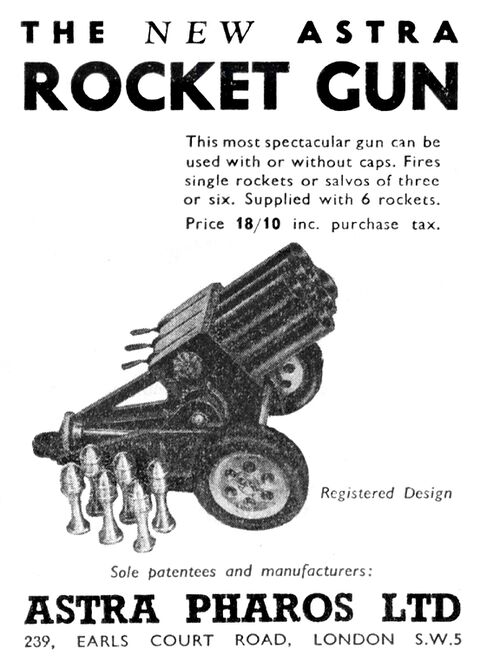