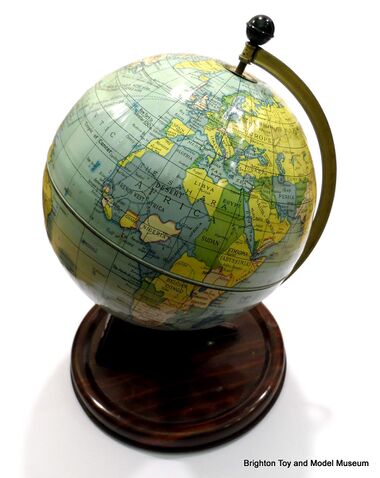 A lithographed tinplate Globe of the World, made by Chad Valley circa ~1948.

The globe is made of two pressed tinplate hemispheres, seamed together at the Equator. with a metal arm, a black rotation knob above the North Pole, and a wood-effect tinplate base. The base is marked Chad Valley", but has no obvious date markings.

The existence on the globe of French West Africa (Afrique occidentale française, AOF) dates it to before 1960 (when the federation broke up), and the existence of a single undivided Germany then dates the globe back further, to pre-1949, when the country was split by occupying Allied forces into East Germany and West Germany (which were reunified in 1990).