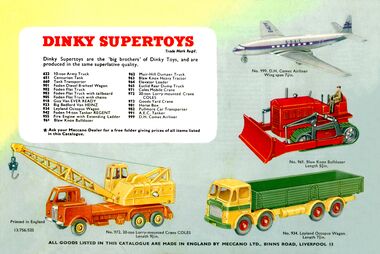 Meccano Ltd created the sub-brand Dinky Supertoys in the late 1940s, partly as a way of making more sense of their Dinky brand, which now contained a number of larger and more expensive pieces that were not especially "dinky", and partly to answer the customer question, "why do the larger ones cost so much more?".

Cost was strongly influenced by the amount of metal used. The volume of metal used in a given fixed design scales with the cube of the model's size - doubling the length (and scaling height and width accordingly) multiplies the quantity of metal needed by 2×2×2= eight - but rather than confuse customers with math, it was easier to say "They cost more because they're special Supertoys".

Some of the Supertoys did indeed have special features and mechanisms, but with others, such as the large petrol tankers, the range of opportunities for doing something "special" with the designs was rather limited.

A Fine New Series of Models THIS month we announce the arrival of the forst of our new products -- the Dinky SUPERTOYS. These fine models have been given this name because they are die-cast miniatures similar in general style to our famous Dinky Toys, but much larger. ... These big SUPERTOYS are very striking in appearance. Their size alone is impressive, and the great amount of accurate detail that has been included in them makes them wonderfuly realistic.

With the renumbering of the Dinky range (to finally get rid of the letter suffixes), most Dinky pieces that were designed as Supertoys, and other pieces that were adopted into the Supertoys lineup, were shunted into the number range 900-999 (although the "Supertoy" Army Vehicles (such as 651 Centurion Tank and 660 Tank Transporter) stayed grouped together with the rest of the Army range, in the "600"s).