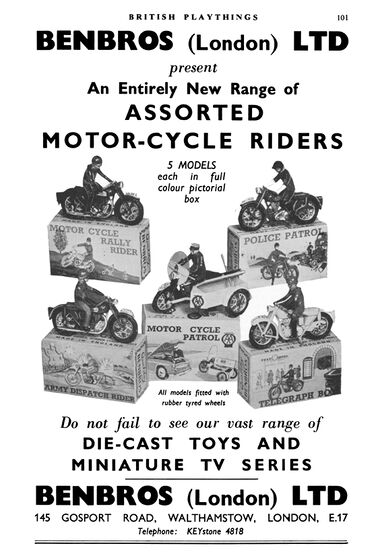 Benbros was founded by the brothers Jack Beneson and Nathan Beneson (in the late 1940s?), and produced diecast toys.

Benbros are chiefly remembered for their range of diecast toy cars, initially packaged in a box styled to look like an upright wooden television set and called the TV Series (circa ~1953), but later rebadged in more modern-looking red and yellow boxes as the Mighty Midgets range (circa ~1956). Another attempt to make the boxes more distinctive resulted in the Zebra Toys range, with boxes featuring alternating black and white stripes. The company also used the name Qualitoys, and made other items such as a range of Robin Hood figures.