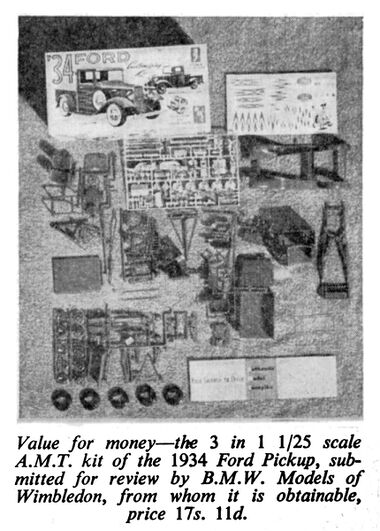 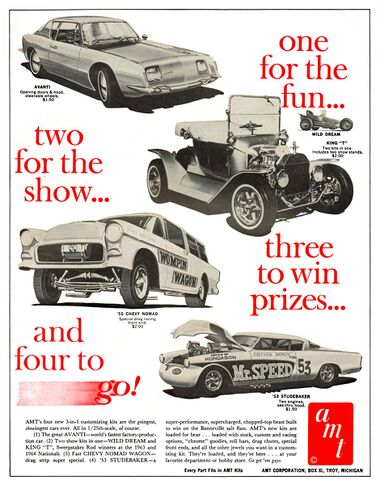 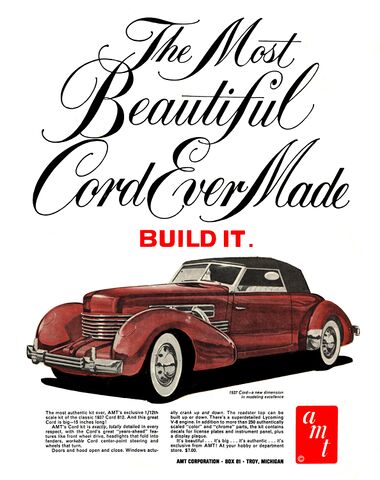 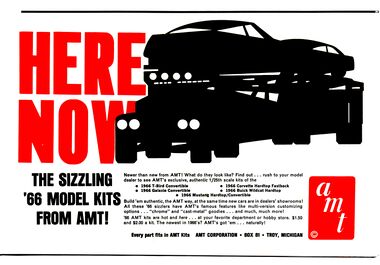 AMT of Troy, Michigan (USA, ~1948-) are chiefly remembered as a maker of automotive plastic model kits, and (for a while) slotcar systems. AMT were bought by Lesney (of Matchbox Toys fame) in 1978, who moved the company to Baltimore and sold it on to Ertl in 1983. The resulting company, AMT-Ertl, then disposed of AMT in 2007.

The company was founded in around 1948 by lawyer West Gallogly, Sr., who thought that it was a good idea to use his connections with the Ford Motor Company to set up a secondary business to manufacture promotional models of the latest car models that could be supplied to car dealers.

In a retail environment where there was a strong emphasis in launching and producing a recognisably different design of car each year, that aficionados would refer to with a year prefix (and whipping up excitement for "this year's model" of Chevrolet or whatever), the scale models could be supplied in advance of the real "new model" cars being available, and used as a tool for generating pre-orders. The scale models could also be used to show the range of different colours that the new car would be available in, another useful tool to help sales staff to encourage buyers to commit to an order without seeing an exact example of the car they'd be buying.

While there were other companies already producing dealership models, sometimes in zinc-based alloys (and usually in 1:25-scale), Gallogly decided to use aluminium, and called his new company "Aluminium Model Toys" (AMT). However the new company almost immediately switched to using plastics (it had been contracting-out the actual casting), making the name rather misleading, and the company became just "AMT".

With the tooling already created to produce the parts for assembling into 1:25 model dealership models, it was an obvious next step to also sell the sprued sets of injection-moulded parts to modelmakers, as boxed 1:25-scale model kits, which AMT duly did, starting in the 1950s.

Another company that supplied car dealerships with plastic models, Scale Model Products ("SMP") started producing plastic car kits in around 1958, around the same time as AMT. SMP's special selling point was the "3-in-1" kit, which used a single set of parts, but marketed it as being able to be used to create one of three different versions of the same car: the stock factory model, a customised version, and a racing version with racing number decals. The "3-in-1" idea was brilliant and made the kits seem better value to buyers, and AMT bought SMP, initially selling both SMP- and AMT-branded kits, but later applying the "3-in-1" marketing to the AMT kits.

In 1962, AMT got in on the booming slot-car craze launching their "Authentic Model Turnpike" ("AMT") slot car range, with the "turnpike" name engineered to fit the initials "AMT". It wasn't a great brandname, and AMT gravitated back to just using the initials AMT again. At this point, AMT were supporting three scales: 1:25 (because of the "crossover" with the dealership models), 1:24 (because this was the larger scale typically used by raceway values where customers could race their cars against each other, for larger cars that were NOT engineered as dealership models) and 1:32 (because this was the standard smaller "Scalextric" scale for home and competitive racing).

After the typical tedious and tortuous rounds of company buyouts and property rights transfers that happened to AMT (along with many other toy companies) in the Eighties, the current situation is that the AMT models are being produced again by specialist plastic kit producer Round2, who are also producing old kits from MPC, Lindberg, and Polar Lights.