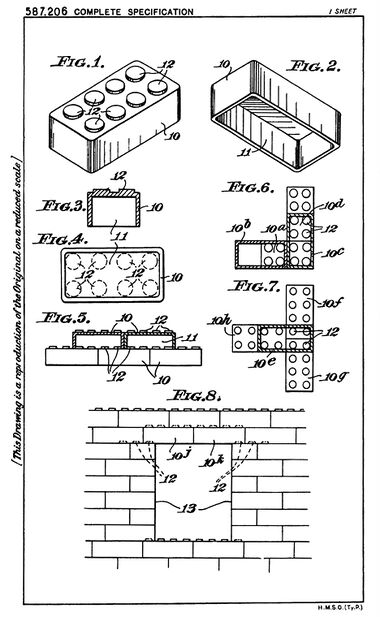 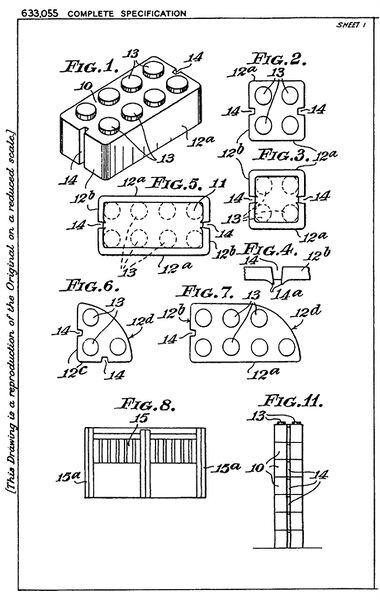 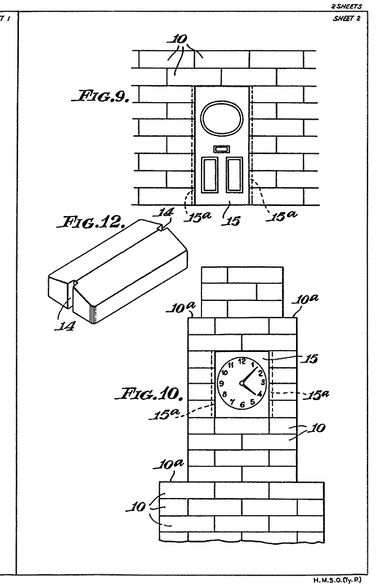 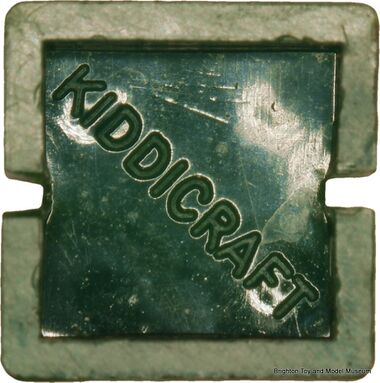 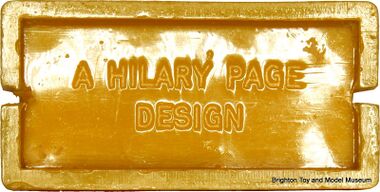 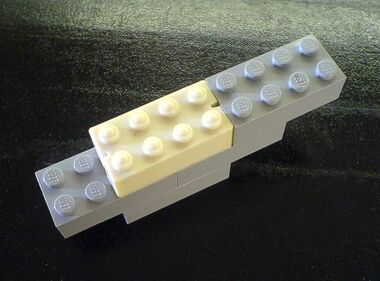 Lego vs Kiddicraft: Comparison of a ~1947 Kiddicraft Self-Locking Building Brick (white), with some modern 2012 Lego bricks (grey). Any difference in external dimensions is undetectable with a micrometer, and the two sets of bricks interlock just fine. The main difference (other than the slots) is that the Kiddicraft bricks have mildly rounded vertical edges and bobbled tops to make it easier to locate the bricks with their neighbours. The Lego bricks have flat tops (with the Lego logo), and sharp vertical edges (which makes the corners more painful when you tread on them!). [image info]

Self-Locking Building Bricks were invented by Hilary Page and appeared in shops in the late 1940s. The bricks were a development of Page's Interlocking Building Cubes, and were the basis of the modern Lego brick.

This construction set was the culmination of years of research and R&D by Hilary Page, and the result of a chain of patents on the bricks and improvements and accessories such as baseboards.

However, when a Danish company that made wooden toys decided to investigate the possibility of buying an injection-moulding machine, a sales rep from England took a set of blocks with him from his previous client (Page), and seems to have suggested to the Danes that if their company bought the nice machine, that this was the sort of cool thing that they could make with it.

Lego seemed to agree, and quickly started churning out their own copies of Page's blocks, complete with end-grooves.

Both Page's and Lego's ranges initially faltered, but Lego's range took off after advice from a sales rep, and they started exporting to America. Page, meanwhile, found that his distributors had trouble selling the sets, and he tried to boost the fortunes of his company by announcing an ambitiously large range of dollhouse accessories. Before the range could be completed, a dejected Page killed himself, apparently without realising that the Lego company had been making money from unauthorised copies of his designs.

After Page's death, Lego bought the rights to Page's designs from his daughter. Lego went on to remove the end-slots from their bricks, put their company name of the top of each brick's pegs, and improved the way that the brick bases clipped together. However, the basic design, size and proportions are still recognisably Page's. 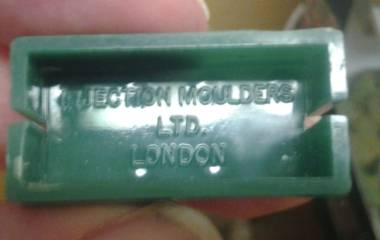 Underside of a Kiddicraft brick,showing the name of an injection-moulding company. Other bricks carried the Kiddicraft patent notice

Although Page's initial patent was for a more "conventional" Lego brick, this was followed up by a further patent for an "improved" version with side-slots, and it was this "slotted" version that actually went into production.

The problem faced by Page using early plastics production was the issue of tolerance and grip. In order to grip well (a property now referred to by Lego as having "clutch power"), the space that a brick's studs fitted into had to deliberately be fractionally too small, so that the walls of the receiving brick had to flex to accommodate the stud. This flexing meant that the receiving bricks' wall were effectively "sprung" to grip the stud.

If the space is a perfect fit for the stud, or fractionally larger, the bricks will have a weak grip, worse, fall out when unsupported. If the space is too tight (or the batch of plastic is to hard) the bricks will be difficult to clip together and pull apart. Page's use of cylindrical studs with sides pressed against flat walls gave just about the right amount of friction, and meant that the walls weren't required to flex too much ... getting this right was probably the result of years of experimentation by Page with plastics to find what worked within the tolerances allowed by injection moulding.

As an extra degree of protection from "bad batches" of bricks in the production process and to make the production process more idiot-proof, the last generation of Page's design included end-slots in all the bricks. This allowed a "harder" grip in the microdimensions of the design, alleviated by the increased ability of the brick's side-walls to flex open, thanks to the slot. The grip function was now less susceptible to the effects of tiny variations in the physical properties of the plastics used, as a larger proportion of the effect was now designed into the larger-scale geometry.

The primary object of the present invention is to provide an improved form of building block which enables a built-up column or structure to support vertical sheets or like thin members, which may represent windows, doors, or the like. A further object is to provide a construction in which the blocks will interlock firmly.

Further, the blocks will have a degree of resiliency, so that when a block is mounted on another block, there will be a slight opening out due to the slots, and the inherent resilience of the blocks will tend to close the blocks, thus ensuring a firm fit.

When the Lego company originally pirated the design, their bricks kept the Page-patented end-slots. However, as production continued, the Lego bricks were able to do away with the end-slots, and started to include hollow flexible cylindrical protrustions moulded into the base. This meant that instead of pegs being pressed against one side-wall, or two (for a corner) every stud in Lego's new bricks had four regions of contact.

Having decided to "slot" the bricks, Page made the slots an "added-value" feature – the slots could be used to insert small plastic doors and windows (provided) between bricks, but could also be used to insert larger pre-printed card picture inserts.

As a final flourish, included thin strips of (incredibly cheap!) wood could be run through a line of bricks and allow the end brick(s) to apparently hover in mid-air unsupported. This allowed a row of bricks to hover above a window-frame or opening (see also the crane arm on Instruction card No.17).

The wood strips were more useful than might first appear, as many of the designs included gaps in the walls for inserting cut-out card signs (e.g. "Post Office"), so in these situations the strips helped to restore structural integrity to a wall that had otherwise been compromised.

A fifth function for the slots (after increasing grip, allowing slot-in plastic accessories, allowing slot-in cards, and allowing the wooden strips) was that one could use them with push-pins to mount rotating cardboard wheels or windmill sails.

Page applied for a patent for the original Self-Locking Building Brick design in December 1944, which was granted in April 1947, as patent GB587206.

The patent for the slotted version of the brick design was applied for in June 1945, and was granted in December 1949, GB633055