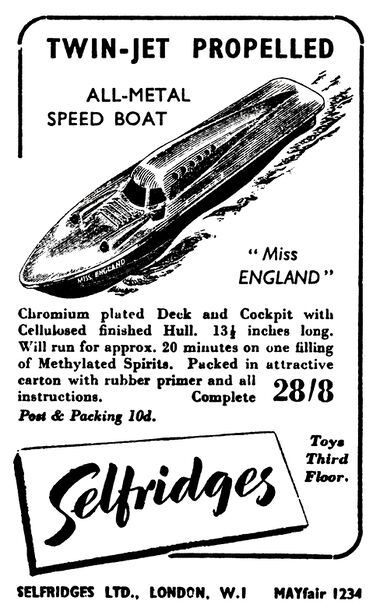 The "Miss England" put-put model boat was made by Victory Industries, initially under the Victory name in (~1948?), and then when the company realised that the toy business was more complex than they'd initially thought, and that someone else already had the rights to the "Victory" trademark, ended up being distributed, rather more anonymously, by J.L. Randall (owners of the "Merit" brand).

The boat was rather flashy with a gleaming silver-coloured upper deck, and originally came with a "put-put" engine (with a flame heating water in a tube to produce a simple steam pulse-jet), but Victory are supposed to have later experimented with fitting the boat shell with a Mighty Midget electric motor.