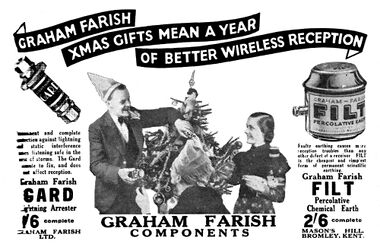 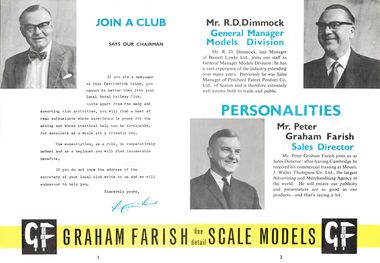 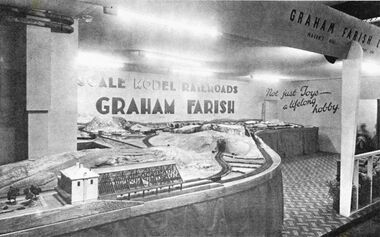 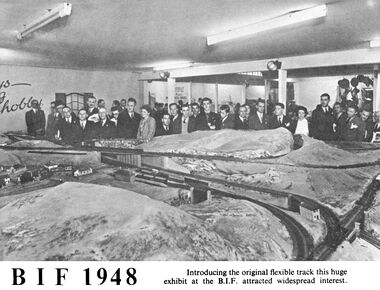 1948: Launch of the Formo flexible track at the 1948 British Industries Fair [image info] 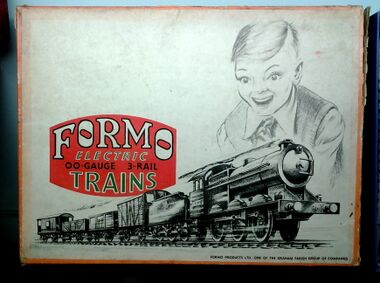 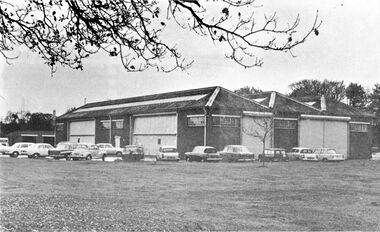 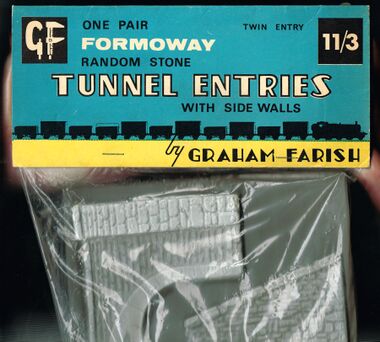 Graham Farish (the company) was founded by Thomas Graham Farish in 1919, and made and sold a range of engineering-based "odds and sods", capitalising on the radio craze by selling radio components for home constructors. When the enthusiasm for home-built radios subsided, Graham Farish moved into other manufacturing, and made electric fires, jar lids, fountains and plant food pellets, with Thomas Graham Farish enthusiastically patenting various innovations. They reinvented themselves as a model railway company in 1948.

Always looking for new markets, Graham Farish showed their Formo flexible model railway track in 1948, with their GP5 00-gauge train sets appearing in 1949, and produced sixty-odd figures for the Coronation in 1953. As one of the early adopters of two-rail 00-gauge, Graham Farish then briefly started producing three-rail sets, in 1953, under the Formo name.

The motors for their (two!) model locomotives were scheduled for migration from 3-pole to 5-pole operation in late 1969.

Farish were always a slightly odd model railway brand. While they had something of a cult reputation in some circles for the ability of their locomotives to run realistically at very slow scale speeds (after being suitably run-in), they didn't produce all that many locomotives, or all that many variations on rolling-stock, perhaps hesitant to commit to the necessary tooling-up costs without having the possibility of mass-market sales of their big competitors. A comparatively small operation without a massive toy or model range, or major toy distribution, the main product line that Farish advertised – quite strongly – was the more unglamorous market sector of model railway track and points (which Farish had apparently mastered and invested in, and could presumably churn out at reasonably low cost).

Where Farish had a special selling point was their flexible track - a product that sold to enthusiasts who would curve it to shape and cut it to size, and which was more suited to hobby shops than toyshops. Because flexible track assumed more technical know how and tools than simple plug-together track, the main model railway companies tended not to produce it, leaving the market open for small specialist companies like Farish and Peco.

Once you have gained a little experience with your first train set, you will find yourself envying those enthusiasts who own a layout with universal track. Flexible track can be used to form curves or any length, and gives the builder complete freedom as far as track planning is concerned, as one is not restricted to one specific radius.

The Graham Farish track system is one such universal system, and the track they produce is in three foot lengths which can, or course, be curved to any radius, and cut to any length. A little more skill is required to lay track of this sort, and I shall be dealing with this in greater detail next month. The same firm also produce a number of locomotives and beautiful Pullman coaches.

The first-generation 00-gauge locos were a Black Five, a Bulleid Pacific, and a Prairie Tank. The design, construction and materials were a little quirky, and at some point in the late 1950s, Farish seem to have decided to clear out the existing stocks, and start again with new designs. Advertising announcing the selling off of the last of the stock was done under the name of Hutchinson Roe, also of Bromley, Kent, who seem to have been one of the Graham Farish companies.

The second-generation 00-gauge locos were a GWR Pannier Tank loco and a revised Prairie Tank loco.

It's not entirely clear why the company seem to have decided to only make tank locomotives for the relaunched range: perhaps they thought that some customers had been put off by the odd tender-motor-and-universal-coupling arrangement used in their earlier tender loco models, and would be wary of buying new Farish tender locos: or perhaps Farish intended to make a wider range of locos, and never quite got around to it.

Oddly, both tank locos had different dedicated electric motors and chassis, so it's not as if the decision was meant to re-use technical R&D and parts, to make production more efficient.

Like fellow track manufacturer Peco, the fact that Farish hadn't invested massively strongly in a super-wide product range for 00-gauge (in the 1960s they only seemed to have two basic loco designs) meant that when the new N-gauge format appeared, they were able to throw themselves into the new format, launching their N-gauge range in 1970, and dropping the 00-gauge range entirely in the early 1980's to concentrate exclusively on N-gauge.

The brand became part of Bachmann Industries in 2000.

The following 47 files are in this category, out of 47 total.