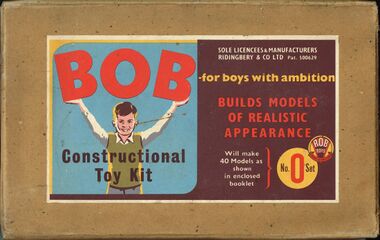 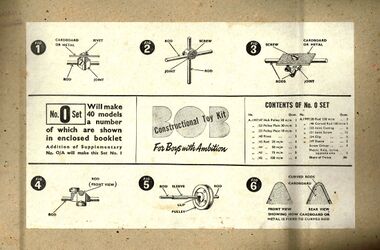 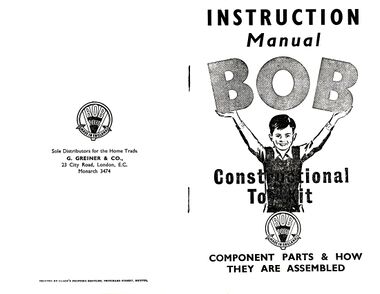 |A boxed and apparently unused example of a BOB Constructional Toy Kit, No-0 Set made by Rob Toys, circa ~1946.

The set is supplied in a reasonably sturdy stapled brown card "panel" box, which has become a little squashed over the years. The lift-off lid has a nice, almost immamculate "as new" condition colur label, and ther eis a back and white label with abbreviated instructions pasted onto the underside of the lid.

The set comes with a smallish 16-page black-and-white stapled manual.

The set's contents are very nicely displayed on a black card with tan lettering, which at first sight looks like gold (because of the high contrast with the black).

The carded contents are accompanied by a double-thickness piece of corrugated cardboard, placed on top. The purpose of this was not just to make the box more sturdy, but also to act as a space-filler – if the owner bought one of the expansion packs (which were supplied simply carded, without a box), this cardboard piece could be discarded, and both the original set and the expansion set could be kept together in the original box.

The set is complete, and there is no indication that any of the pieces have ever been removed from the backing card.

A certain amount of rust and surface corrosion is visible on the steel rods, and the box sides are a little squashed.

A faint purple mark on the inside of the box appears to be a retailer stamp, whose first line is illegible, and whose second line says "MARKET STREET".