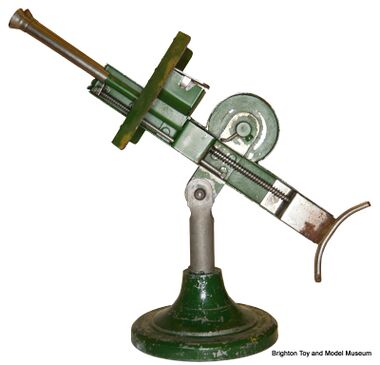 We're giving this item a provisional date of 1945. Meccano Magazine indexes list the piece as as having been advertised in Meccano Magazine in February 1945, but our archives don't have this issue, and the online scan libraries appear to be missing the relevant page. Due to the disruption of the War, it's conceivable that the design might have been created earlier, but not advertised. It was definitely being advertised in 1948.

The gun is mostly green-painted metal with a very heavy circular cast base, and most of the rest of the construction being shaped sheet-metal. The central pillar with vertical tilting mount, main barrel covers, ammunition box lid and shoulder support are bare metal.

The spring-powered gun fires metal (or home-made wooden) cylindrical rounds, gravity-fed from the ammunition box, by turning the handle. A complex arrangement of springs and rods fires the projectiles through twin internal barrels, while longer external sleeves extend and retract giving the impression of explosive recoil. The firing handle is attached to a shaft with two "pedals", one for each gun barrel, offset by 180 degrees so that the guns fire and recoil alternately.

At the back of the gun is a curved piece that would have been used on the real gun as a shoulder-rest as the gunners squinted through the sights.

This gun is modelled on the lines of the famous twin barrel Navel Oerlikon gun, and is spring operated, firing single shots or a stream of 20/25 projectiles, the barrels automatically recoiling with each shot. Overall length 10 in. Complete with projectiles. Price 22/6 including purchase tax.

Based on a round devised by Rheinhold Becker during WW1, the improved version of the gun manufactured by Oerlikon Contraves of Oerlikon, Switzerland was mass-produced by multiple manufacturers and widely and copied during WW2 as an almost generic ship-mounted anti-aircraft machine gun, known generically as "the 20mm Oerlikon".

The basic design allowed a firing rate of over 300 rounds per minute without ammunition belts, with the weight and recoil meaning that the gun was primarily used by fixing it to the deck of a ship, where it could be used to bring down incoming attack aircraft.

An almost omnipresent piece of ship artillery during WW2, the Oerlikons were considered redundant and mostly scrapped with the appearance of fast jet fighters and anti-aircraft missiles, but are probably still used by a few smaller navies.