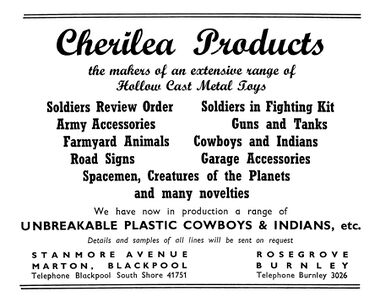 Cherilea was initially a prolific producer of hollowcast lead toys, that quickly moved into plastics.

The company was started just after the ends of World War Two by Johilco's chief designer, Wilfred Cherrington, in conjunction with a Mr Leaver, with their new company name being a compaction of the two surnames (Cherrington / Leaver). Thanks to the two founders' intimate knowledge of the market and Cherringtons ability to rapidly sculpt a range of models, Cherilea ended up proding a pretty huge range fo figures in a range of sizes.

While most of these were standard lead-toy subjects, such as modern and historical soldiers, Cherilea is remembered for some of their more unusual subject ranges, such as their range of dinosaur models, and their Spaceship/Astronaut/Alien Monster piecs, which showed that the company was willing and able to do more than simply produce lookalike ranges that were similar to what was already being produced by other makers.

the makers of an extensive range of Hollow Cast Metal Toys.

We have now in production a range of UNBREAKABLE PLASTIC COWBOYS AND INDIANS, etc.