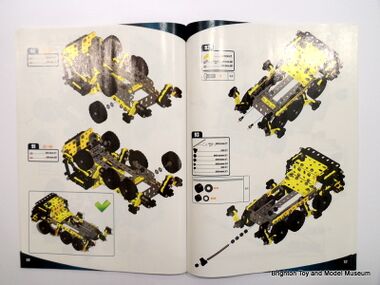 The Meccano Evolution 8200 Crane Truck is a lovely model, but in the great tradition of the original Meccano sets, some parts of the assembly instructions don't quite work. In the days of Meccano Ltd., this was presented as a challenge to the engineering ingenuity and problem-solving abilities of the owner.

The following notes were made with reference to the 2013 printed assembly manual. It's quite possible that the manual may change at some point, making these notes redundant, but meanwhile it can be useful to get an outside confirmation that that piece of the manual that you don't understand really is wrong...

The instructions show the addition of two silver-coloured nuts and bolts. If you want the final model to look exactly like the one on the front of the box, you'll want to use black bolts, instead.

These steps show the addition of two short right-angled brackets (which have a round hole on one face, and a "stretched" hole on the other).

If you assemble them as shown, with the "stretched" hole against the radiator plate, then when you come to step 8, you'll be screwing a black strip across a line of three circular holes that won't quite line up, the result being that your radiator plate will end up developing a concave bend.

To avoid this, flip the orientation of these two angle brackets so that the smaller round holes are screwed against the radiator, leaving the elongated holes free. When you get to stage 8, the two elongated holes will provide enough "play" to accommodate the black strip without causing the radiator to bend.

The threaded bar only has a few millimetres of thread at each end once the plastic spacers have been fitted, which isn't really enough for a reliable connection with the plastic end-pieces. When you fit these two assemblies, you may find the end-pieces coming off, and to get around that, you may have to carefully adjust how the amount of protruding thread is shared between the two plastic pieces at the ends. Try not to knock the end-pieces off, as it can damage the plastic threads, worsening the problem.

The cab assembly requires the roof to be fitted to the radiator grille, initially by nothing but these two assemblies, which also have to be flexed because the spacing of their mounting points on the roof isn't the same as the spacing where they attach to the radiator. If you do destroy the first couple of millimetres of plastic thread of an end-piece, you can swap it with the identical piece used to hold the wing-mirror.

You'll quickly notice that the black corner screw attaching the two plates together doesn't fit well - the adjacent plate protrudes into the area and overlaps with the head of the bolt. This means that the bolt head ends up perched on the edge of the plate. If this worries you, you can leave the bolt out, these two plates end up being bolted together by two other bolts in step 19 and 20, so the corner bolt is mostly cosmetic. Use it or not at your discretion. 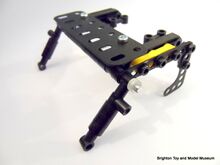 This step involves threading a long "triaxle" rod through eighteen plastic pieces and then anchoring it with rubber grips. You may find that the rod doesn't want to go through the thick plastic spacers. This may depend on the ambient temperature (it might be an expansion-contraction thing). I tried it in a warm room and it worked, but in a cold room, I had to use a chunky pair of pliers to repeatedly twist the rod until it could work through the thicker pieces.

If you find yourself doing this, you'll be manhandling the radiator assembly which is only attached by the two delicate windshield assemblies, which is inviting an accident (see: Step 13)

If you find yourself meeting any troublesome resistance when threading the bar, temporarily detach the supports from the radiator before trying to thread them onto the long horizontal bar, and then reattach them to the radiator once you've finished step 30. 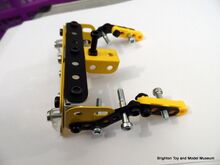 Using pivot bolts as "pegs" to temporarily align the holes in the thin side-strips, before tightening [image info]

You won't be able to tighten the nuts in steps 27 and 29 until after you've fitted the yellow plastic spacers in steps 28 and 30, because the nut sides have to be aligned against the spacer sides to be able to fit in the confined space. You may want to try the sequence, 28-27, 30-29, or you might want to look at come up with your own method to carrying out the steps 26-30

Given that you'll be using force fits for some of these joints, and the side-pieces won't be particularly rigid at this point, it might be useful to temporarily push-fit some spare bolts or pivot-bolts through the unused holes, to pin the joints and stop them from slipping and rotating when you tighten everything up. 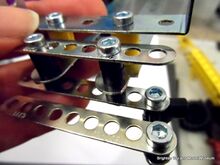 This step involves the two biggest "gotchas" of the design. Essentially, the steering rod assembly built in Step 45 (which lets you steer the truck's front wheels using a small knob on the top of the cab) doesn't quite fit. You can get around this by simply leaving out the steering assembly (build it, then put it to one side) - the front wheels will still swivel in unison without it.
If you really want everything to work, you'll have to do a bit of extra DIY:

To start with, you can see from Fig 46 that the main steering rod, an A429 75mm tri-axle rod, passes through two small silver -coloured strips which hold it in place, and passes by the rounded end of one of two larger silver strips that run along the length of the chassis.

Unfortunately, since these larger-size strips are wider, the nearest large strip overhangs and blocks the rod - you can't thread the rod through the two smaller strips without hitting the larger strip. If you look at the large diagram in Step 46 of the manual, you'll see that it seems to show two solid pieces passing through each other!

To get the assembly to work as shown, you'll need to file a cutout in the large strip, or use a pair of tin snips or aircraft shears to remove a suitable chunk, to allow the rod room to pass. 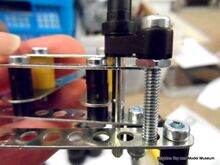 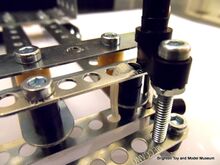 A working assembly, thanks to the "cable tie" quick-fix solution [image info]

Once the shaft fits smoothly into the holes in the two small strips, you'll notice another problem - the plastic two-hole block that attaches the steering bolt (C868, figure 44) is supposed to sit squarely on the top of the upper strip, but the adjacent bolt that you added in Step 41 has a head that is too wide - the block won't "seat", and even if it did, it still wouldn't be able to turn through +/-45 degrees unless you Dremelled away half of the adjacent bolt's head.

An easier option is to carefully remove the bolt and replace it with a thin nylon cable-tie, running through the same spacers, and returning through the two adjacent holes in the pair of small strips. Close the tie, tighten it, and snip off the excess with scissors.

This step involves screwing an L-shaped bracket to the ladder frame with a nut and bolt. Before you do this, thread a washer onto the bolt to make it behave as if it's shorter, otherwise the tip of the bolt can protrude too far and foul the ladder mechanism that you'll be building in Step 108.

Further modifications to the model will be dealt with in a separate page.