The large motorised and lit Meccano fairground Ferris Wheel, five feet four inches high (~163 cm) and around four and a half feet across, is located in Arch One, in the overhead display area.

The wheel is completely made of standard red and green (and silver) Meccano apart from its electronics and special heavy-duty main axle and bearings, and is covered in sequenced flashing multicolour lights.

At one point Meccano produced special sets of electrical parts such as commutators for an "electrical" Meccano add-on system called Elektrikit, and these parts were eagerly seized on by Meccano enthusiasts who wanted to create moving and automated display models while still using only official Meccano parts. 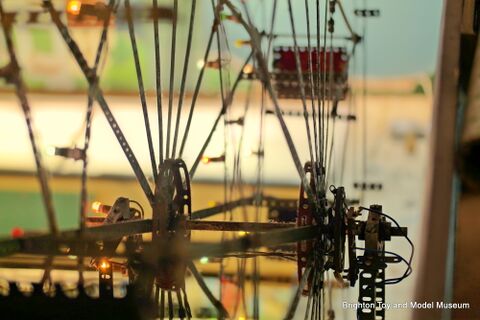 The wheel is a custom piece designed and built for the Museum by Ron Bowler and Gordon Hall in 1993, with the lighting, spindle and transformer built and installed by Gordon Bowd.