From The Brighton Toy and Model Index
(Redirected from Mogul)
Jump to navigationJump to search
Error: {{#seo:}} must contain at least one non-empty attribute. 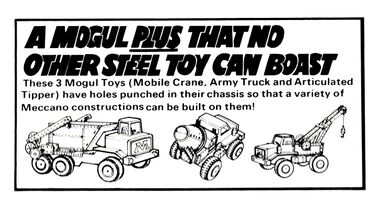 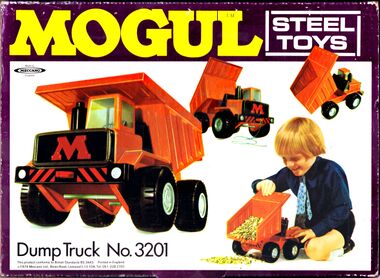 The Mogul range of steel toy vehicles were released in 1974 and 1975, apparently as a response to the success of Tonka Toys, which had demonstrated that there was a market for robust, heavy-duty steel toy vehicles.

The Mogul range weren't branded Meccano just because of their emphasis on metal construction (or to cash in on the Meccano name), as some of the range had holes punched on a half-inch grid so that they could be customised with Meccano parts - a punched vehicle base could have a customised home-made Meccano crane (or container, or rocket launcher) designed and built for it by its intrepid Meccano-owning owner.

However, the degree of customisability varied so strongly between the different toys in the range that it was difficult to use this as a primary selling-point.

Like Tonka Toys, the Mogul range were simply styled to reflect their near-indestructibility.

The Mogul range didn't last long before they were discontinued - the Tonka brand had established itself strongly in the public's mind as effectively "owning" this part of the market, and by promoting Mogul mainly as a ready-made toy (with details of the the "customisability" aspect, which was rather inconsistent between models, relegated to a panel on the base of the box), there wasn't enough to differentiate the Mogul brand from the market leader.

Tonka were also very heavily advertised (with their UK TV adverts doing a very good job of showing off the desirability of their toys). Some commentators have also pointed out that perhaps the Mogul line might have been designed to capitalise on the success of the then-popular "Mogul" UK television series, which was bringing the word into regular use. Although there wasn't an obvious link between the toys and the TV series, the word now had a strong recognition factor, and it hadn't previously been trademarked for toys - and the Mogul range was also cancelled shortly after the television series went off the air. On the other hand, if Meccano //did// hope to get free advertising from a tv series for adults that largely revolved around boardroom conflicts and company takeovers, this was never going to be as effective as the Tonka ads showing chubby tots throwing chunky construction vehicles around, accompanied by the fun alliteration of the "Tonka Toys" name.

The Mogul logo adopted the recognisable first letter "M" from the "Meccano" logo, vehicles had the large "M" on their radiator grilles, and the large chunky tyres were marked "Meccano".