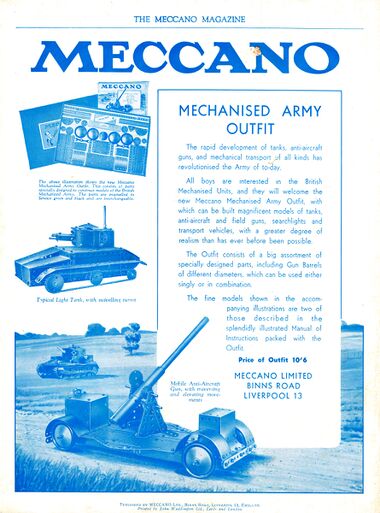 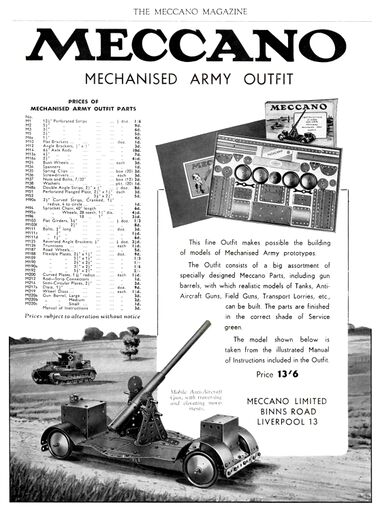 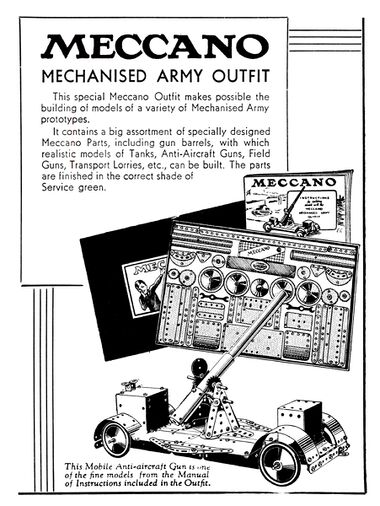 The Meccano Mechanised Army Outfit appeared in 1939 as a response to the onset of World War Two, with advertising appearing in Meccano Magazine from August 1939 through to 1941. The range was introduced in an article in August 19139.

As well as the inclusion of some new (wooden!) parts useful for making model gun barrels, the most obvious distinguishing feature of the sets was that all the parts were enamelled in "service green".

Production seems to have ceased in 1941, doubtless as the need to divert metal supplies to the war effort became more intense. 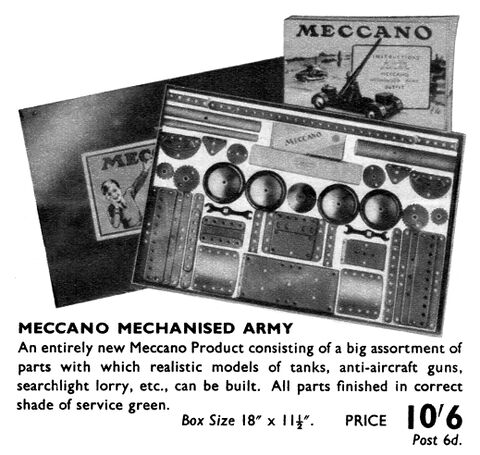 The rapid development of tanks, anti-aircraft guns, and mechanical transport of all kinds has revolutionised the Army of to-day.

All boys are interested in the British Mechanised Units, and they will welcome the new Meccano Mechanised Army Outfit, with which can be built magnificent models of tanks, anti-aircraft and field guns, searchlights and transport vehicles, with a greater degree of realism than has ever before been possible.

The Outfit consists of a big assortment of specially designed parts, including Gun Barrels af different diameters, which can be used either singly or in combination.

The fine models shown in the accompanying illustrations are two of those described in the splendidly illustrated Manual of Instructions packed with the outfit.

THE use of mechanical transport to replace horse-drawn vehicles and columns of marching men and the rapid development of tanks, anti-aircraft guns, and armoured vehicles, have revolutionised the Army of today.

All boys are interested in the British Mechanised Units, and the new Meccano Mechanised Army Outfit announced on the inside front cover of this issue has been planned to enable them to build splendid models of tanks, guns and transport vehicles with a greater degree of realism than has been possible before. The specially designed parts in this Outfit are enamelled in Service green and black, and they are all interchangeable in the same manner as standard Meccano parts. This means that they can be assembled in different combinations to build up models of various types, several fine examples of which are illustrated on this and the the facing page.

One of the main items of equipment of a modern army is the tank, of which there are different types. The tank has been developed from the original idea of defending troops from machine-gun fire, and may almost be described as the modern counterpart of bullet-proof armour. It is capable of travelling over the roughest ground, and in its latest forms is very heavily armed.

The Royal Tank Corps has two types of tank, known as "Medium" and "Light". The present "Medium" weighs 12 tons and is fitted with a 90 h.p. 8-cylinder petrol engine, but the type is gradually being replaced by a "Cruiser" tank of nearly the same weight but of double the horsepower. The "Medium" carries a crew of five and is capable of a speed of 22 m.p.h. In front of its turret is a two-pounder quick-firing gun with a machine-gun beside it, and below and to the right of the latter is the driver's lookout manhole. A further machine-gun is placed on each side of the tank. In a vertical tube on top of the turret is housed a Morse signalling lamp.

Most of the "Mediums" are fitted with wireless.

Remarkably realistic models of tanks can be built from the special parts contained in the Meccano Mechanised Army Outfit, and a good example of these is the "Light" Tank shown in Fig. 5. It is based on one of the latest "Light" units in the British Army, and reproduces closely all the main external features of the actual machine. The "Light" tanks weigh about 5 tons. They are fitted with a 25 h.p. petrol engine and can travel at speeds up to 40 m.p.h., while their gun equipment consists of one light and one heavy machine-gun.

The model illustrated is complete with swivelling gun turret and creeper tracks, and as the parts from which it is built are enamelled in the Service green colour of the actual vehicle it has a truly lifelike appearance. One almost expects to see the crew come scrambling out of its interior! A finishing touch is given by the noses of grim-looking machine-guns protruding from the front of the turret, the radio mast at the rear, and the look-out manholes on top.

The rapid development of long-range aircraft and the increasing efficiency of aerial bombs has neccesitated the provision of adequate defence against air attack. The British Army has made great and rapid progress in this respect, and its equipment is now among the finest in the world. Special types of guns, both mobile and stationary, have been produced specially for anti-aircraft work. The mobile guns are mounted on travelling platforms, in such a manner that they have full range of movement and can be elevated and traversed with sufficient speed to follow the movement of the fastest bombing aircraft. The 3.7 in anti-aircraft gun can fire twelve 28 lb. shells in one minute, and these shells take only eight seconds to reach a height of 10,000 ft.

The high speed of modern bombing planes makes it of vital importance to get the earliest possible warning of a coming attack. Human eyes and ears, unassisted, cannot be relied upon as aircraft detectors, and - therefore scientific instruments of great sensitivity have been intro- for the purpose. These are designed on the principle of human hearing, namely, that when waves of sound reach a person he instinctively turns his head until they come with equal volume to each ear; he is then facing approximately the origin of the sound. The sound locator used in anti-aircraft units may be described as a sort of mechanical ear consisting of large movable trumpets. One man operates the trumpets for the horizontal plane and another for those of the vertical; and a third man works out from the relative positions of the trumpets where the aeroplane is at any particular moment. This information is then passed to the searchlight crew, who direct the beam accordingly.

The height at which the aeroplane is flying is ascertained by a crew of three working a height finder, which might almost be described as a mechanical substitute for eyes. This information is passed to a team operating what is known as a predictor, which is one of the most marvellous instruments ever introduced for military purposes. It makes with surprising accuracy all the calculations that are required by the anti-aircraft gunners, and does this work with the greatest rapidity.

Splendid models of anti-aircraft guns and searchlights are quite easy to build up from Mechanised Army Outfit parts. A good example of a mobile gun is shown in Fig. 4, while Fig. 2 illustrates a realistic model of a type of gun suitable for mounting on fixed sites, such as the tops of important buildings. A model of lorry carrying a searchlight is shown in Fig. 3. The searchlight is pivotally mounted on the platform body and can be traversed and elevated in any direction.

Fig. 1 shows a reproduction of an 18-pounder quick-firing field gun and trailer, and is a very interesting model to construct. The 18-pounder guns of the British Army have an extreme range of about 8,000 yds, and are capable of firing up to nine rounds of ammunition per minute. Guns this kind are used to support infantry in attack and defence. They are not associated in fixed proportions with battalions of infantry, but are used as circumstances require. Thus one, two or three troops of guns, or even a whole regiment, may assist infantry in an assault on a strongly held line, by providing a creeping barrage. A regiment consists of six troops, and its war strength is 24 guns. When travelling the 18-pounder guns and their trailers are hauled by "Light Dragon" motor tractors, which are handy little towing vehicles.

Army transport wagons often have to travel over very rough and uneven country, and for this reason are often fitted with creeper tracks instead of tyred wheels. A model of this kind built from Mechanised Army Outfit parts is shown in Fig. 3. The creeper tracks are carried on a pivoted rear bogie.