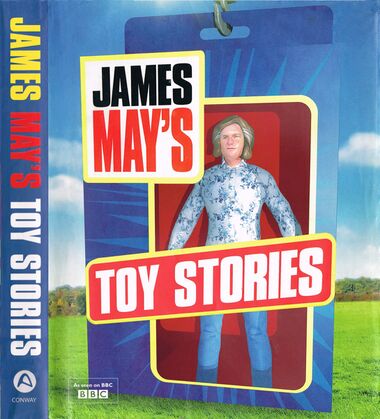 2009: book cover (portraying James May as an "action figure") and spine [image info]

James May's Toy Stories is a 2009 TV series and book, celebrating classic British toys and reexamining their possibilities. The series is credited with generating a fresh wave of public interest in the six toys originally featured. The success of the series prompted a string of four one-off television specials in 2011, 2012, 2013 and 2014.

The team created and built a scaled-up version of one of Airfix's most famous models, the Supermarine Spitfire. The real-size (1:1) model was made of fibreglass, and assembled and painted, complete with a pilot figure created from a life-cast of James May.

A team of 2000 volunteers created a mass of Plasticine plants and flowers which were used to create a Plasticine garden display for the 2009 Chelsea Flower Show. The garden won a People's Choice award.

This episode's challenge involved students from the University of Liverpool designing and building a full-size working half-bridge out of standard Meccano parts.

For this episode, the team and ~400 volunteers laid out a circuit of Scalextric slot-car track around the original route of the Brooklands Grand Prix circuit. Since some of the original route had been built on, this involved running the track through the occasional building.

This involved building a full-size house out of 3.3 million Lego bricks. This was the only toy out of the "classic six" that was not technically a British brand (although the original Lego bricks were "borrowed" from a design by Hilary Page and Kiddicraft).

Building a 16 km 00-gauge model railway track from Barnstaple to Bideford, along the old path of a real railway line (now the Tarka Trail cycle path). None of the 00-gauge trains tried out on the track managed to complete the full distance (which amounted to a scale distance of over twelve hundred kilometres). This is more than the round-trip rail distance from London to Edinburgh and back again (listed as 534 km each way).