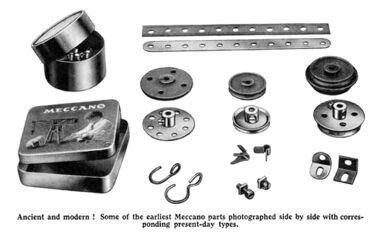 A very early cast and machined pulley-wheel from a Mechanics Made Easy set, the sets created by Frank Hornby before he came up with the name Meccano in around 1907.

This is the original version of the pulley design as featured on Frank Hornby's original 1901 patents, with a central sawcut, before it went through multiple revisions to become the modern Meccano pulleywheel.

The finish on the thick, solid brass wheel is quite crude, with an apparently sand-cast body that's then been roughly machined. The v-shaped groove machined into the edge is also noticeably off-centre, giving it a handmade, "prototype" look.

Frank Hornby's early "Mechanics Made Easy" sets were practically home-made, with Hornby tackling as many parts and processes himself as he could in his shed with the limited tools available to him, and with other work being subcontracted out to various local engineering companies in the area who probably had trouble understanding what it was that they were being asked to make, and why. It's quite possible that this wheel may have been crudely cast by a contractor and then finished by Hornby himself.

Most of these original MME parts are nowadays almost impossible to find, as they were only produced for a few years while Hornby's manufacturing was practically a cottage industry, and before the system became popular.

When Hornby moved from the "sawcut" system to the "tongue wedge" system, his remaining stock of wheels was updated by cutting a tongue into the existing stock of wheels, so the original unamended wheels only really existed in the earliest completed sets. Since the sawcut wheels could only be used with the original matching clips, and could then only be befitted to the early (slotted) axles, early adopted of Hornby's system may have found these wheels almost useless after they'd bought newer sets, and simply thrown them away.

The early MME pulley-wheels are especially hard to track down, as there were never any more than one of these per set.

Evolution of the Meccano pulley

This first version of the pulley design is illustrated in Hornby's 1901 patent. Cast and machined from a single piece of brass, these early wheels and pulleywheels had a slot cut into one side of the central hole, with a matching slot cut into the side of the slotted axle rods. To fix the two together, a "feather" springclip would be fitted to the axle, with one edge of the "feather" in the axle's slot. The wheel's slot could then be aligned with the feather and jammed into position. 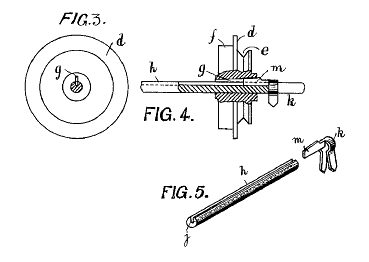 The second version has an arc drilled or machined out of the inside of the wheelmounting (rather than a slot), and a new design of spring clip with a protruding "tongue" that wedged into the resulting gap between the wheel and axle. the wheel to the shaft.

The tongue version of the fixing provided a larger frictional surface area that may have made the wheels less likely to fall off, but it's big manufacturing advantage was that axles no longer required an additional manufacturing stage to cut a lot along their length.

Subsequent versions used two metal plates riveted together with a diverging flares around the rim to act as a channel, and a cast brass collar attached to one side of the wheel. This was drilled and threaded and fitted with a fixing screw so that the wheel could be secured to a shaft by tightening the screw.

The screw-mountings were originally just a single screw-hole on one side of the collar, which meant that the shaft was always slightly off-centre, which could be problematic in "precision" Meccano designs – this was addressed in later fixings by drilling the screwhole all the way through the collar (and threading the result), resulting in a pair of opposing screwholes. These could still be used with a single screw, but allowed a particularly fastidious builder to use an opposing pair of screws to more accurately centre the shaft.

This became the standard version of the Meccano wheel mounting, the only real further development being the introduction in the (1970s?) of stainless steel "Tri-axle" shafts with three flattened faces along their length. These allowed a screw to be tightened against a flattened face, giving guaranteed zero slippage, as on the very first "feather" version.