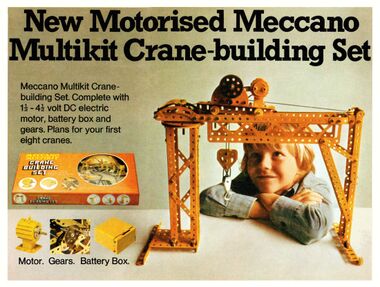 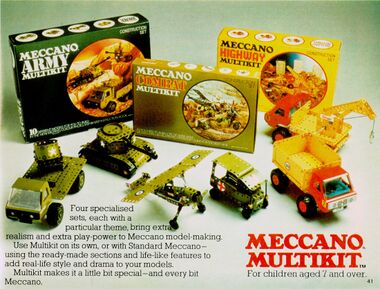 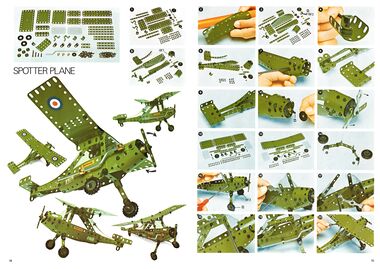 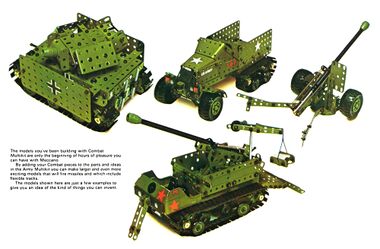 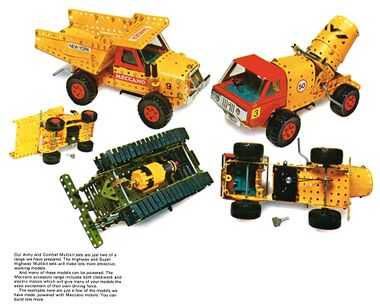 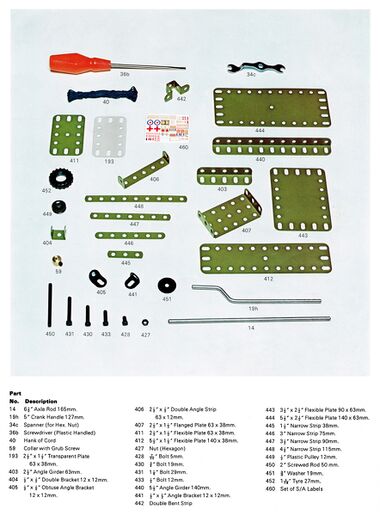 Parts for the Combat Multikit. Note that the normally silver-coloured nuts, bolts and brackets are now black [image info] 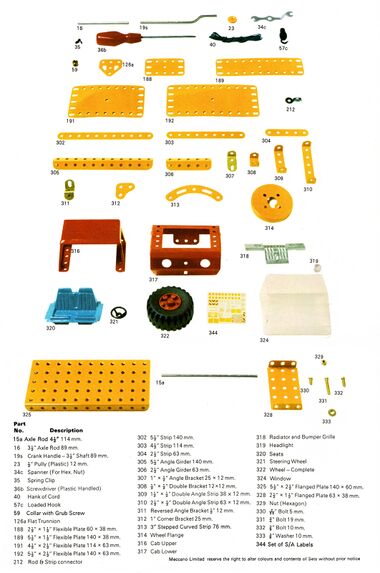 Parts for the Highway Multikit. Nuts, bolts and some brackets are gold (brass), some strips are painted yellow. [image info] 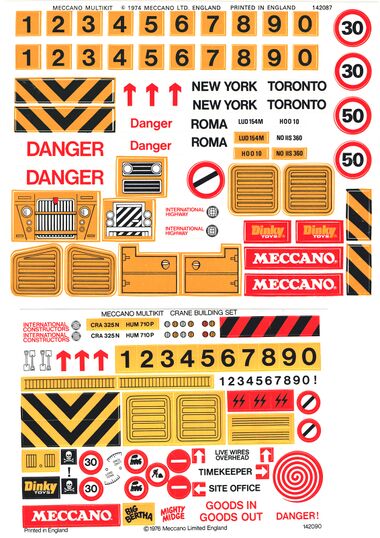 A generous selection of stickers, on two sheets, for the Highway Multikit [image info]

The Meccano Multikit sets appeared in the early 1970s, and was new owner Triang's attempt to produce more focused sets that made it quite clear what sort of models the owner could build. If a child liked cranes, then the Crane Construction Set Multikit contained a very good range of crane designs and nothing else, whereas the Army and Combat sets only contained designs for military vehicles.

The word "Multikit" was perhaps a little odd (isn't every Meccano set a "multikit"?) but was used on Meccano sets focused on a particular type of model, with a colour theme to match - the Army and Combat Multikit parts were almost all drab green, the Crane Multikit parts were almost all yellow, and the Highway and Super Highway Multikits were yellow but with a red driver's cab piece.

Each Multikit set came with a dedicated "Book of Models" that dealt only with models specifically of the type that the set was designed for, and the sets also came with a generous quantity of stick-on decals to make the models more realistic.

Multikits were designed to avoid the parent's worry that if they bought their child a conventional "do anything"" Meccano set, that the child might be bewildered by the choice and not know what to do with it, or find the smaller models uninspiring and the larger models too specialised. On the other hand, if they had a Highway Construction Set Multikit, they'd have a choice of large models, all of which were pretty good, and had good play value, with big chunky tyres and an almost ready-made cab module, and which, with the addition of the stickers, would make a commercial-grade toy. Even of they only ever built one thing with the set, it'd still be a good toy in its own right (similar to a Tonka Toy, or Meccano Mogul), with a minimum of "wasted" unused leftover parts.

The dedicated cab shell and moulded plastic internal seating and steering wheel were especially useful in letting the builder take this standard robust and good-looking module "as-is" and then concentrating their building work on constructing the parts that made vehicles interestingly different, rather than on trying to construct their own cab with less satisfactory results. The flattish "high visibility" front of the cab was good for construction-site vehicles, but if the user wanted, they could also build a long engine bonnet in front of the cab, attached to the vehicle chassis.

The large balloon tyres were again useful for building authentic construction-site vehicles and for other "heavy-duty" vehicles like trucks, and along with the "blunt" cab made the resulting models suitable for use as chunky toys able to cope with rough play. 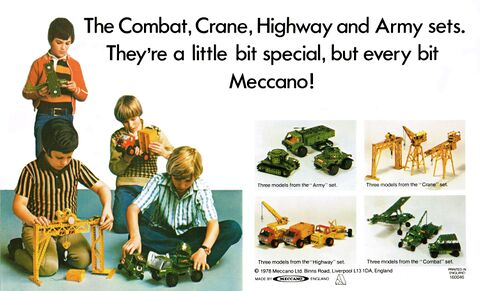 1978 advert: By 1978, the Crane sets had also appeared (~1976, without the Multikit branding). Meccano were now promoting all the special sets together, without mentioning the word "Multikit"

The Crane Construction Set that appeared in ~1976 can be considered an "honorary" Multikit set – it was effectively part of the same series, used the same design themes (including special-coloured parts and nuts and bolts) and was advertised as being part of the same group of "special" sets ... it just didn't have the word Multikit in its name. We're guessing that this wasn't due to any deeper policy regardign what was and wasn't a "Multikit" (the crane set didn't include the custom cab parts, but neither did the Combat Multikit) ... it may simply be that by 1976, Meccano Ltd had decided that the Multikit name was unnecessary. 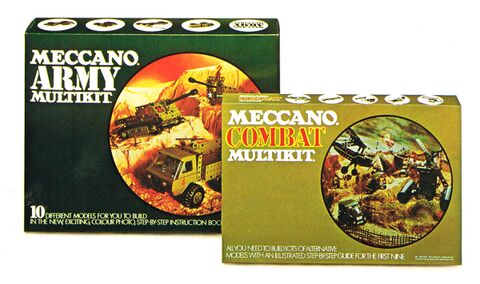 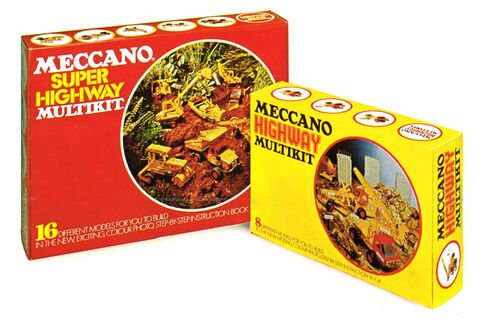 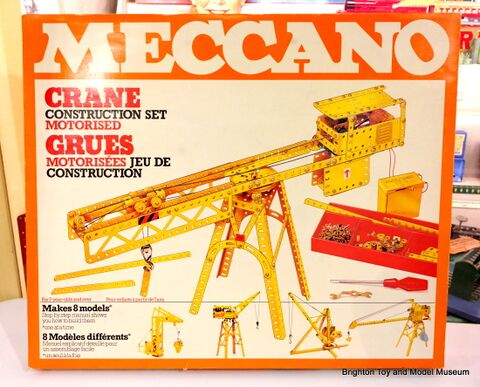