From The Brighton Toy and Model Index
(Redirected from Lego)
Jump to:navigation, search 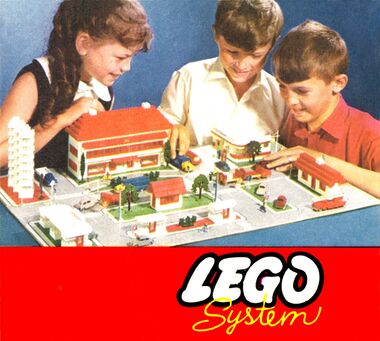 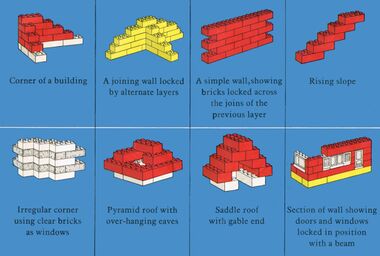 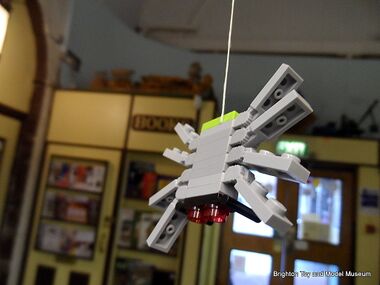 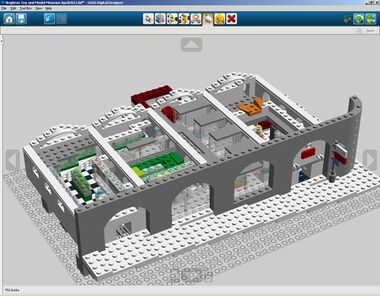 Lego is a classic "plastic building blocks" toy that appeared in Denmark in around 1948 and became the world's favourite toy. The original Lego brick was based on an original design by English child development psychologist and inventor Hilary Page, and subsequently improved, to become the "modern" Lego brick in 1958.

In the UK, "Lego" (when referring to the "bricks") refers to the Lego system or to a quantity of Lego pieces, and British users tend to react with horror to the US convention of referring to a Lego brick as "a Lego", or to the use of "Legos" as a plural. We don't know what the convention is in Denmark.

Standard Lego pieces typically have cylindrical raised pegs on their upper face and a hollow underside, and can be clipped together to make walls and more complex shapes. The proportions of Lego pieces are precisely defined in "metric" units, with ~4.8-millimetre-wide pegs arranged on an exact eight-millimetre grid, and with each brick's sides set back from the grid by an additional tenth of a millimetre to allow for clearance and flexing.

The side of a "standard" brick is precisely 9.6mm high, and for Lego "plates", the corresponding height is exactly 3.2mm (one third the height). These rigid official definitions have ensured that today’s LEGO bricks still fit those from 1958, despite any incidental changes in shape, colour and design that may have taken place over the years. As well as producing more "custom" pieces such as wheels, roof components, trees and the distinctive "Minifigures", Lego have produced a number of more specialised sets and several "themed" series ("Space", "Pirates", and so on). After producing a number of highly successful ranges designed to tie in with existing franchises, notably their "Star Wars" range, Lego went on to develop their own "in-house" theme brands (such as "Bionicle").

Lego Technic (1977-) is designed more for the construction of mechanical models with complex moving parts, and includes more "engineering-based" pieces such as driveshafts and gears. Unlike normal Lego, "Technic" beams tend to be 8 mm on all sides with additional holes instead of studs, giving "Technic" models a "holey" appearance more similar to the FischerTechnik (1964-) and short-lived Philiform (1969-1972) plastic construction sets (and, to a lesser extent, to Meccano). Lego Technic parts, combined with a "programmable brick" developed by MIT Media Laboratory in the 1990s and various motors and sensors formed the basis of the Lego "Mindstorms" kits, for building simple robotic systems.

In 1932, carpenter and cabinetmaker Ole Kirk Christiansen set up a wooden-toy manufacturing business in the village of Billund, Denmark, supposedly adopting the name LEGO in 1934 from the Danish "Leg godt", meaning "play well". While there are various theories as to where the name came from (including one about the US plastic toy manufacturer Elgo, who Lego settled up with because of the similarity of the name), it might not be a complete coincidence that "Lego" is almost an anagram of "Ole C".

The company bought Denmark's first plastic injection-moulding machine in 1947 and by 1949 was producing about 200 different wooden and plastic toys, including "Automatic Binding Bricks", the predecessor of the modern Lego brick.

LEGO was introduced in the United States in 1962, initially via a deal with the US plastic suitcase manufacturer Samsonite.

Lego appeared in the US when the Vietnam War (1955-1975) was escalating and becoming increasingly unpopular with the US population (especially because the military draft meant that some US soldiers had been forced to join up), and some of Lego's 1960s advertising tapped into parents' anxiety over this: while some hobby magazines were full of adverts for guns and military academies, which caused some parents understandable anxiety over the idea that their children might be scooped up by military recruitment and sent overseas to become a casualty in a dangerous war that was increasingly being seen as unjust and immoral, Lego's advertising emphasised the idea that Lego would instead encourage children to be creative free-thinkers that might instead grow up to be designers, artists or architects.

Lego's rejection of militaristic themes is supposed to have gone so far that it supposedly refused to produce Lego in "drab green" and restricted the availability of Lego in green and brown (with the exception of trees and green "grass" baseplates), to make it more difficult to produce Lego models of army vehicles. Instead, LEGO promised that its products would "develop the child's critical judgement, manual dexterity, and ability to think for himself".

This conscious avoidance of anything to do with the military lasted until Lego won the Star Wars franchise, in which many of the vehicles had unavoidably obvious weaponry. The amount of money generated by the Lego "Star Wars" sets arguably saved the company, but at the cost of incurring quite strong disapproval from some parents, and the complaint that Lego was abandoning its pacifist ideals. Lego's rationalisation would presumably have been that Star Wars was pure fantasy, and that its implicit violence was as unlikely to cause copycat violence as the presence of cutlasses and cannons on a Lego "pirate ship" set. Although the Star Wars "blasters" looked similar to normal handguns, one could not easily obtain a lightsaber or an ion-cannon-equipped spaceship on an American high street – it was similarly difficult to join the Rebel Alliance and attack the Death Star. However, although Lego produced lots of police cars, fire engines and emergency rescue set vehicles they apparently never produced any contemporary army or war sets. The possible exception to this being a Lego "Toy Story" set that represented the movie's bright green plastic army figures – however, in the film, these weren't real army people, they were characters who thought that they were real army, but were actually mass-produced toys (which all gets slightly "meta").

Children love to learn, to experiment, to find out. That is what children are really doing when they play. Play is learning made enjoyable.

Lego is like that. The bricks fit together so easily and accurately that a very young child can use them, yet they are so versatile there is always something new, more complex, more exciting to build so that Lego grows with the child. It is never dauntingly difficult, never so simple that it is quickly outgrown and cast aside.

If the bricks become soiled with constant use, a quick swish in warm not hot) soapy or detergent water will bring them up bright and colourful again ready for more hours, days, years of absorbing, creative play.

At the age of 3 a child is entering the Lego age. He will be happy with a few bricks, but not too few or there will not be enough play possibilities to meet his needs. As a child grows older he needs more bricks to match his growing imagination. The more he has the more frequently he will play.

A Basic Set is the best start for a Lego collection because the Basic Sets have a balanced selection of the different Lego bricks and it is easy to build up the collection with the wide variety of little Supplementary boxes at pocket money prices. For birthdays or other special occasions another Basic Set is always most welcome or perhaps a Planpack. Planpacks contain the right number of bricks for building a special model such as a bus or a garage and the bricks can later be added to the collection.

By about 5 years old a child will be ready for the Lego motor with all the exiting new opportunities this gives for power driven models including complete Lego train layouts.

Every time you give children Lego the world of possibilities grows, for more Lego means better models and more fun.

Lego in the Museum

Starting at the very end of June 2019, the museum is hosting a special display of early "Lego company" products in its temporary display space, Area 25.

The special display, "Lego before Lego: A secret history", consists of pieces drawn from The Hatley Lego Collection, and includes early examples of Lego sets, as well as some of the wooden toys produced by the company up until 1960.

Fittingly, the display space is flanked by two displays of other "building" sets whose brands have not survived, including Airfix's "Betta Bilda". Meccano's "Cliki, and the Hilary Page Kiddicraft plastic bricks that were the inspiration for the Danish bricks.

Lego itself is still going strong, and in 2011, the company's North American sales exceeded one billion US dollars.

To get to the Brighton Lego Store, walk directly away from the front of Brighton Station down Queens Road until you get to the Clock Tower. The Churchill Square Shopping Centre will be the large modern complex over to your right. The Lego Store used to be set into the building's front, but has now been moved inside, facing the lower atrium, and near to the lifts and escalators.