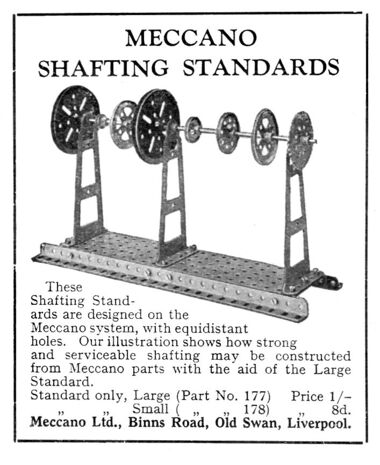 The "shafting standards" were special parts used to hold a raised driveshaft that could then be used to drive multiple pieces of equipment via pulleywheels and/or other connections at different places along the shaft. The "common driveshaft" configuration was typical in factories before the advent of cheap electric motors - a factory would typically have a single heavy-duty engine (perhaps water-powered or steam-powered), driving a high overhead shaft running the length of the factory, and individual factory machines would then be powered by drivebelts connecting to the overhead drive shaft.

The shafting standards could be used to power a number of stationary Meccano models from a single Meccano steam engine or electric motor, either for utility (a raised shaft might run along the back of a workbench, allowing models to be quickly connected and disconnected from a single securely screwed-down motor), or to create a Meccano model of a factory layout.

The early 1930s advertising referred to two versions of the "shafting standard" part:

Meaning of the word "Standard"

Some people may find the word "standard" confusing - in this context, it means "a thing that holds something aloft". The word is related to the French estendre ("extend") and probably also influenced by the idea of a "stand" for holding something. "Standard" can also refer to a portable military flag-and-pole, or to a Roman legion's symbol of authority, and the pole that it's attached to.

In the late C20th, this meaning of the word was most common in the name "standard lamp", where the word "standard" didn't refer to any form of "standardisation", but to the fact that the lamp would be mounted on a stand.