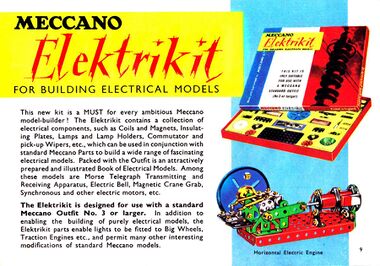 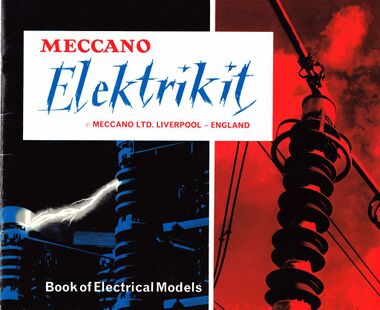 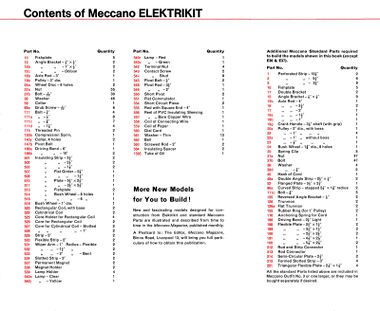 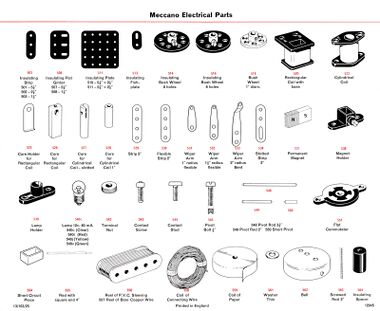 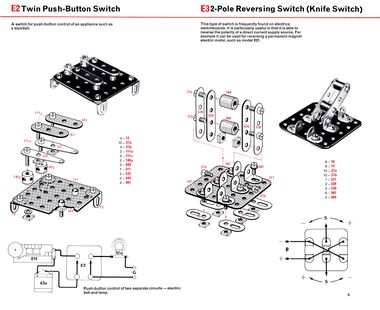 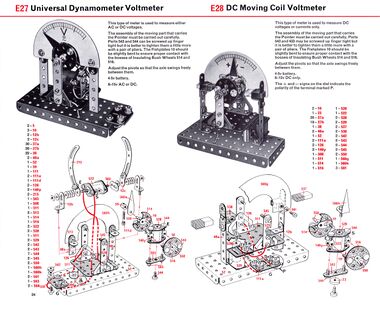 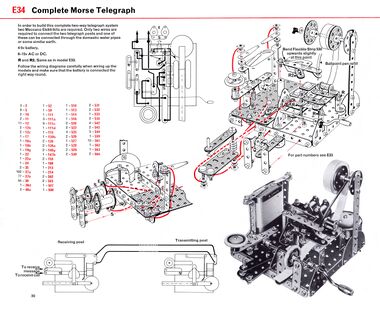 A boxed Elektrikit set of parts intended to be used alongside conventional Meccano ("for use with sets 3 and higher").

Elektrikit started out as a Meccano France product, but was arguably mismarketed in the UK, and didn't do well. However, some of the individual electrical Meccano parts introduced by Elektrikit were gratefully used by generations of dedicated Meccano modelbuilders who wanted to add electrical features (such as automated switching lights) to their models without "cheating" by using non-Meccano parts.

The box lid is dominated by vertical blue, white and red blocks (from left to right), which is probably a reference to the French flag and the French origins of the product.

This new kit is a MUST for every ambitious Meccano Model-builder! The Elektrikit contains a collection of electrical components, such as Coils and Magnets, Insulating Plates, Lamps and Lamp Holders, Commutator and pick-up Wipers, etc., which can be used in conjunction with standard Meccano Parts to build a wide range of fascinating electrical models. Packed with the Outfit is an attractively prepared and illustrated Book of Electrical Models. Among these models are Morse Telegraph Transmitting and Receiving Apparatus, Electric Bell, Magnetic Crane Grab, Synchronous and other electric motors, etc.

The Elektrikit is designed for use with a standard Meccano Outfit No.3 or larger. In addition to enabling the building of purely electrical models, the Elektrikit parts enable lights to be fitted to Big Wheels, Traction engines, etc., and permit many other interesting modifications of standard Meccano models.