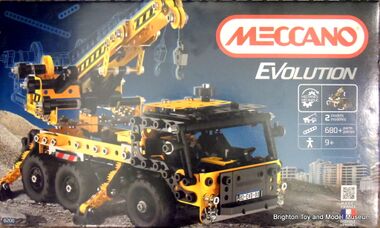 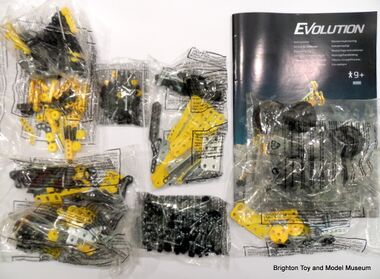 The Meccano Evolution 8200 Crane Truck is the biggest and most advanced of the three "Evolution" models launched by Meccano in 2013.

The model is listed as having over 680 parts (ages 9+), and comes with a printed construction manual for just the crane truck - the alternative model shown on the back of the box doesn't have a printed instruction manual - instead this can be downloaded from the company website, as a PDF file.

The model is of a six-wheeler crane truck, and is predominantly black and yellow, with some silver parts. The bolts have hexagonal "Allen" socket heads, and square nuts, and come in a mixture of silver and matt black, depending on where they are to be used on the model. Gears and pulleys are black or yellow plastic, plates are metal, and strips are a mixture of standard original Meccano strips, and the new thinner double-hole-density "Evolution" strips, again in black, yellow or silver. Some plastic spacer blocks are included, and shafting is of the "tri-axle" type, steel shafts with three flattened sides that allow wheels and other parts to be push-fitted without needing grubscrews.

The model has seven knurled knobs that operate different parts of the truck:

Due to the double-density spacing of the holes on some of the parts, there is an issue with the design of the steering mechanism that was not resolved in time for the product launch - building the crane as described in the 2013 plans requires two metal parts to be modified (or replaced) - one metal strip needs an inset filed or cut into the side of one of its ends to create sufficient clearance for one of the model's shafts, and one of the bolt heads needs to be filed down (or more easily, the bolt replaced by a small nylon cable-tie). Both of these modifications affect parts between the two front wheels and inside the cab, so they don't affect the model's external appearance.

The model can be built without these modifications by omitting the steering column assembly (shown in step 45 in the instruction manual). Without this column, the front wheels will still steer properly, but can't be controlled by the knob on the top of the cab.

If the model has been bought as a Christmas present and the recipient is impatient to build the truck, then leaving out the steering column assembly is the simplest way to get the truck completed using just the unmodified parts in the box, and doesn't affect any of the truck's other functions or features.