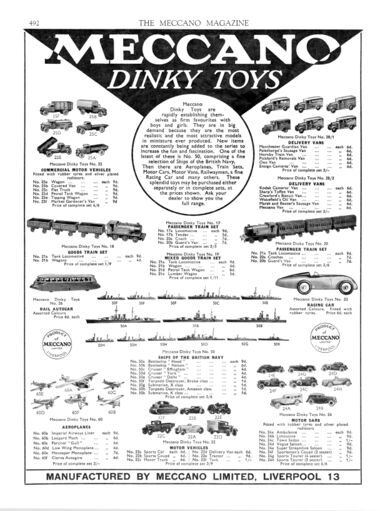 June 1934: Full-page advert in Meccano Magazine.
Note that the "Meccano" logo is substantially largr than the "Dinky" logo. [image info] 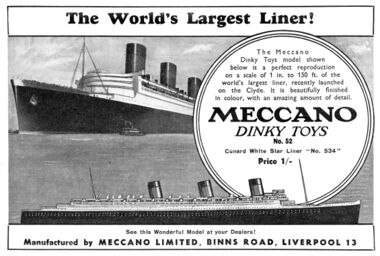 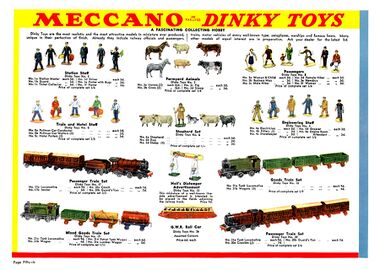 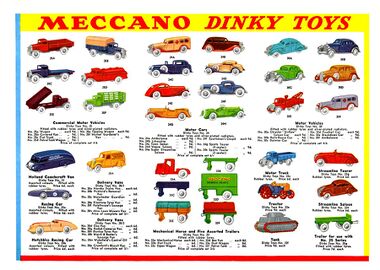 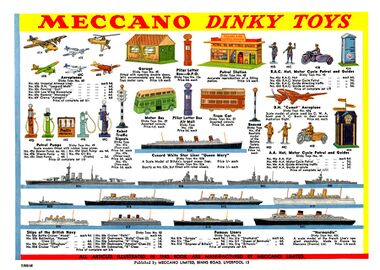 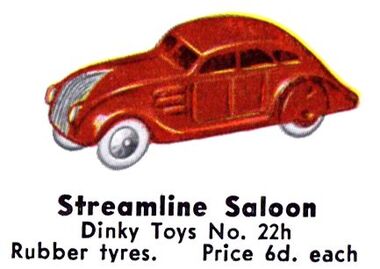 When the Hornby Modelled Miniatures range was relaunched in early 1934 as Dinky Toys, it was with a big investment in design and advertising.

The new "Meccano Dinky Toys" initially led with the Meccano name as a reassuring "known" umbrella brand, but as it soon became well-enough known to be marketed independently, transitioning from "MECCANO Dinky Toys", to "DINKY TOYS by Meccano", to just "Dinky Toys".

After the very first pieces (such as the first version of the delivery vans), casting was switched from lead to "MAZAC", a tougher and lighter metal alloy better suited to standing up to harsher treatment (which was especially important if thin parts of the moulding were to be holding wheel axles in place). The experimental nature of these new casting processes led to some severe production problems, where stresses and strains frozen into the castings caused some models to warp and twist over time, with some falling apart before they even reached the shops (the current theory is that some of this variation in the MAZAC mix properties was due to workers throwing scrap metal into the vats). These teething problems were eventually resolved, but it's not unusual to find that some of the oldest, long and thin pieces from the period (such as the ships) have warped and broken up over the years ("banana-ing"), creating more of a price premium for nicely-cast unwarped versions of some of the more damage-prone pieces.

On the other hand, the difficulty of moving to these new casting techniques (and setting aside the tried and tested lead-casting methods) meant that better-established and more conservative metal toy casting companies such as W. Britain) tended to stay with lead, and with pieces with no moving parts, and as a result, Dinky had the British diecast metal vehicles"market pretty much to itself during this period.

The speed at which the range expanded can be seen from the advertising - initially "150 models", then "250 models", and "300 models" shortly thereafter.

The 1930s Dinky range seemed to be designed to include a bit of everything: Passengers and famyard animal figures for gauge 0 model railways, waterline ships, aeroplanes, under-size (for gauge 0) cars, and even small tabletop "floor toy" toy trains.

As the range icreased in sized, it incorprorated more road vehicles, a garage and pertol station, petrol station pumps, postboxes, a small double decker bus and tram, and AA/RAC/Police figures, motorcyclists and their huts (and a police box).

There was also a brief foray into Dinky Toys Dollhouse Furniture, to go with a leatherboard collapsable "[[Dolly Varden]" dollhouse, but this doesn't seem to have been a huge success, partly because of Meccano Ltd's odd decision not to use a standard 1:12 or 1:16 dollhouse scale.

As the Second World War loomed in 1939, the Dinky range developed a range of army vehicles in drab green, which expanded during 1940.

The early Dinky packaging inherited the emphasis on sets from the Modelled Miniatures ranges, where pieces were typically organised into numbered sets of six, with the pieces within a set distinguished with a letter, so for instance, Dinky Set No.2 was a set of six farmyard animals (2a-2f), in a cardboard box, but if you wanted to buy a pig (2c) separately, you didn't get a box.

Dinky extended this even to models that didn't obviously form simple sets - if you wanted to buy a standard-sized Dinky car, the retailer would buy them in boxed packs of six, and you'd be sold your individual car "loose".

The range produced in the 1930s tends to be referred to as the "prewar" Dinky range, and since only a few new sets were issued in 1940-45, these tend to be lumped together with the 1930s "prewar" sets – even though they were technically produced during the war, they can be considered the "stragglers" of the 1930s range, appearing just before World War Two (1939-1945) finally shut down production.

The following 40 pages are in this category, out of 40 total.