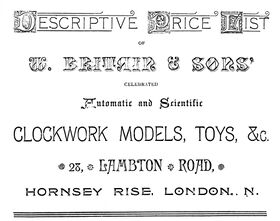 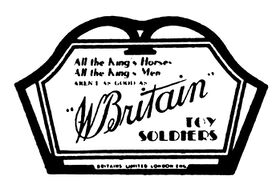 "All the King's Horses and all the King's Men aren't as good as W. Britain's Toy Soldiers", point-of-sale advertising circa 1940. There were six different cards in this series, including cards for Britains Farm, Zoo, etc. [image info] 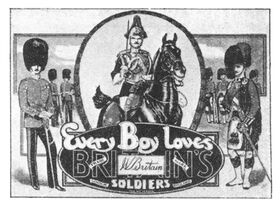 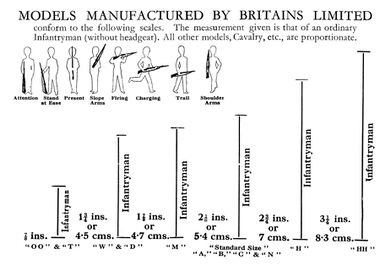 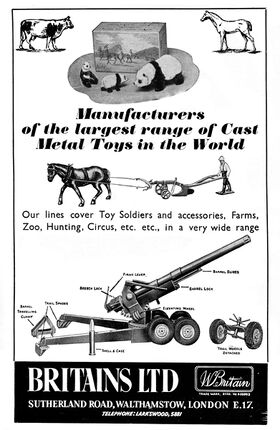 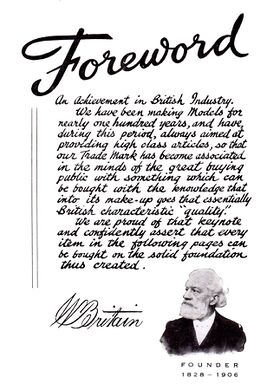 1958: Foreword to the Britains Ltd. catalogue, with picture of William Britain [image info]

Britains Limited, or William Britain was the UK's largest producer of cast lead toys, and pioneered the hollow-casting process.

The company name suffered badly from a wandering apostrophe, moving logically from W. Britain and Britain's, to Britains' when there was more than one "Mr. Britain" involved, and eventually the apostrophe escaped altogether leaving the name as Britains.

William Britain Senior began his career as a 'Brass Cock Maker', and by 1880 had a broadsheet catalogue listing and illustrating a number of clockwork novelties such as The Mechanical Foot Race, The Mechanical Dog, The Mechanical Bear, Don Quixote and the Windmill and The Equestrienne. The catalogue also included a couple of wheeled road-rollers of different sizes, which Britains were keen to point out were "... made of solid castings, and not stamped tin, like most of the foreign rubbish that is now sold" (!).

Britains' enthusiasm for casting paid off, and in ~1893 the company started producing the toy soldiers that would make William Britain a household name, using the hollowcasting process.

Despite the fact that imports from Germany dominated the toy market, Britains continued to grow, with production only slowing/stopping during the First and Second World Wars. 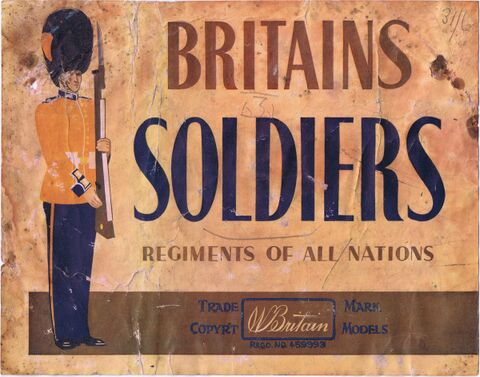 "Hollowcasting" produced hollow (rather than solid) cast lead figures, normally without a visible exit hole. The advantages of hollowcasting were:

The combination of increased output and lower material costs, both of which allowed retail prices to be reduced, meant that the company's pieces could compete with the bulk-produced German figures of that period.

The two main types of hollowcasting were:

The process is still generally credited to William Britain in spite of the fact that some early German figures have since been discovered that appear to be hollow despite the fact that they're earlier than 1893. However, these early "anomalous" examples of hollowcasting might have represented individual workers' "tricks and techniques" that they may have preferred to keep secret, whereas William Britain explored and perfected the process so that it could become the default production method for his company.

In the early C20th Britains were producing a mind-bogglingly large range of toy soldiers, which were being sold in stout cardboard boxes distinguished by a single box sticker. In order to create more variety in their packaging while still maintaining a single "Britains" look, the company invested in the services of a commercial artist, Fred Whisstock (1878-1943), who was better known as the cartoonist "Quip" in Vanity Fair. The quality and sheer quantity of Whisstock's output for Britains helped to put even more distance between Britains and the other smaller companies that produced lead figures.

Britains boxes from this period that have Whistock artwork that includes his signiture are considered more desirable and command higher prices from collectors.

Cultural trends between the Wars

While Britains is mostly famous for the company's work on military-themed figures, the company produced a wide range of other lead toy sets and pieces. Before the death of William Britain himself in 1906, this was very much a minor side of the company, with figures based on contemporary football teams being the main exception to the military rule - however his son slowly started branching out more by producing lines based on the Salvation Army, the Boy Scouts and railway figures.

The aftermath of World War One changed things considerably, as public sentiment was less receptive to children's playthings with violent trappings. Sensing this shift in popular mood, Britains began to massively increase their production of lines focused more on civilian life. In 1923 the Britains Model Home Farm series was introduced and served as a springboard for the development of other lines, and by 1940 the catalogue included sets based on Zoos, Gardens, Police, Circuses, Hunting figures, Ambulances, Trucks, Mail vans, Roadsigns and Horse racing.

The production of metal hollowcast figures ceased in 1966 due to introduction of plastic figures.

From 1966 until the early 1980s, Britains continued to focus on space and agricultural toys as well as plastic military figures. Britains produced a diecast metal Scots Guard figure set (with plastic weapons) in 1973, and in recognition of collectors' interest in traditional metal models, produced a small (but popular) range of all-metal models in 1983.

In 1984, Dennis Britain wished to retire, and no other family shareholder wished to take over the company. It was eventually sold to The Dobson Park Group, who changed the company name to Britain Petite Ltd in 1986. "Metal Models" continued to appear in the main Britains catalogue during the 1980s until 1987 when it was decided that these lines were collectibles rather than toys. They were therefore given their own special four-page catalogue, and during the late '80s the popularity of these figures continued to grow.

The W. Britain Centenary in 1993 saw the launch of the W. Britain Collectors Club, which now has thousands of members all over the world.

Before World War Two, Britains tended not to quote actual scales (as ratios), but instead had a range of different sizes with associated letters, and quoted the scale for each size in terms of the height of an ordinary infantryman (without headgear).

According to the 1940 catalogue, these sizes came out as:

Toy soldiers might appear in various sizes, custom non-military sets such as the farm , zoo and circus sets were listed as being "Standard Size".