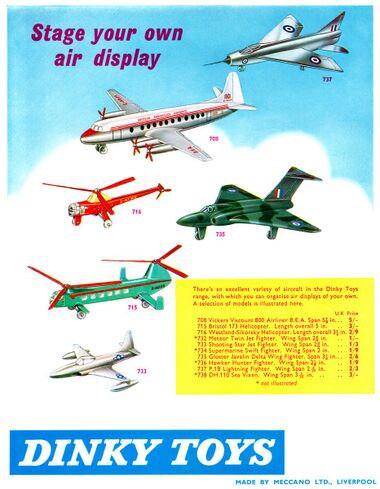 When Dinky production eventually restarted after the end of World War Two, Dinky produced some more small-scale planes as continuations of the pre-war range, but advances in aviation technology forced by the war now made most of the pre-war range look very dated. Some of the record-setting planes that had been famous in the 1930s were now largely forgotten, some of the other planes that Dinky had modelled had not actually gone into production or had only has small quantities built, and the really historical pre-war planes – such as the Wright Flyer, or Bleriot's cross channel aeroplane – had been too small or too intricate to produce in Dinky's chosen scale.

1947 saw four new Dinky planes: the Gloster Meteor jet fighter (a "no-brainer", as there hadn't been jet aircraft before WW2, and the Meteor was British), along with a couple of largely-forgotten propeller-driven airliners (two- and four-prop), and the Tempest 2 propellor-driven fighter aircraft, which again, is nowadays largely forgotten.

Dinky were in a difficult position regarding model aircraft over the next three decades, trying to present a reasonably wide range of different plane types (as they had before the war, while the trend in the aircraft industry was for a smaller number of larger companies producing fewer designs, and where a plane type didn't necessarily have a British version.

What should have been a flagship model – the Dinky No. 749 Avro Vulcan Delta-Wing Bomber (also numbered 992 as a Dinky Supertoy) – ran into severe production problems when metal shortages caused by the Korean War prompted Meccano Ltd to try casting this large model in aluminium instead of the usual MAZAK alloy. Legend has it that the factory had trouble getting the metal to flow all the way to the wing-tips, and that after a single production run of a few hundred, the moulds were so damaged that they had to be retired.

By 1957, the range consisted of three airliners (Vickers Viscount and Viking, and Avro York) that were about to become obsolete, a couple of futuristic-looking silver jet fighter planes (Meteor and Shooting Star), three modern camouflaged British fighter planes (Hawker Hunter, Supermarine Swift and Gloster Javelin), and a couple of helicopters, (a little Westland-Sikorsky and a twin-rotor Bristol 117), plus a De Havilland Comet Airliner as a SuperToy. Most of these were arguably unlucky choices, with the Comet airliner, which Dinky might reasonably have expected to have long-term popularity, hit by the real Comet's multiple crashes and temporary withdrawal due to metal fatigue problems.

By 1961 the range had been rationalised to a formula that was essentially "one airliner, two helicopters, and a set of fighter planes" – the emphasis on fighter planes presumably being that as small planes of roughtly the same size, they could be produced at a larger uniform(-ish) scale.

By this time, the shift was fairly complete from Dinky planes being a range of little metal model planes that you could collect, to being a range of larger toys, where the point of having a range was that the buyer had more choice (such as between a single-rotor or dual-rotor helicopter). Fighter aircraft had more play value, and an owner might want two planes from different countries so that they could stage dogfights, with one fighter in each hand. Not so many owners would want three planes.

1969 saw the release of a pair of German and British Dinky Toys WW2 fighters to concide with the 1969 film "Battle of Britain", and the new planes from this point on all tried to have some sort of "action feature", such as motorised propellors or pop-down landing gear.