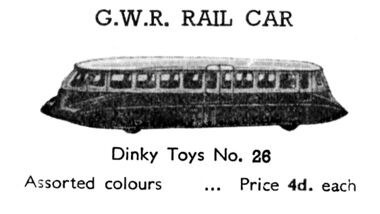 As well as a rail network, the Great Western Railway extended its reach into shipping, air services and bus travel, and this bus-ownership aspect may have given the GWR the confidence to try running "diesel buses on rails" on their rail network in the 1930s

Their wooden panelling appears to have been rather flammable, and the combination of a hot diesel engine, wooden superstructure and gas led to the occasional fire, which may have helped speed their withdrawal from service.

Three examples of the railcars are currently preserved, numbers 4 (at Swindon Steam Museum), 20 (at Kent & East Sussex Railway), and 22 (at the Didcot Railway Centre).