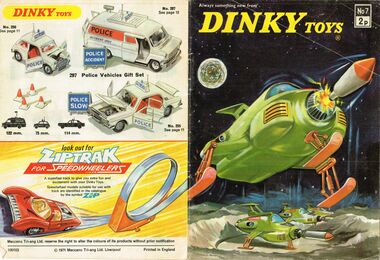 1970s Dinky Toys. By the 1970s, Meccano Ltd. had ceased to exist, having been taken over by Lines Brothers who themselves then went bust circa 1970. Dinky Toys continued adding Gerry Anderson-based models (such as the Eagle Interceptors from Space 1999), and they also produced a Pink Panther dragster, and diecast models of the USS Enterprise and a Klingon Battlecruiser, from Star Trek. Other than these media tie-ins, the Dinky range was looking a bit tired, and there were not many "must-have" models ... there was an army range, motorway service vehicles, and models of some new car models, but the new car designs being produced by British Leyland were often not exactly inspiring – children were not queueing up at toyshops eager to get a model of the Austin Princess.

Although competitors Spot-On were no longer around, Dinky Toys still had to compete with the innovative Corgi Toys, as well as Mattel Hotwheels and Matchbox, and cheap imports, and it began to look as if perhaps the reason for the range existing had petered out.

The factory at Binns Road finally shut down in 1979. The French range of Dinkies had ended a little earlier, with production moved from Bobigny to Calais in 1970, and the Calais factory ceasing Dinky production in 1972.

The following 50 files are in this category, out of 50 total.