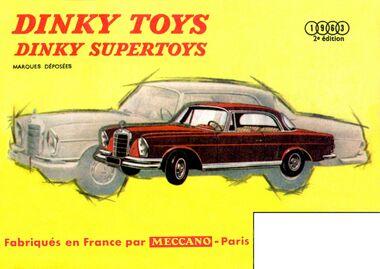 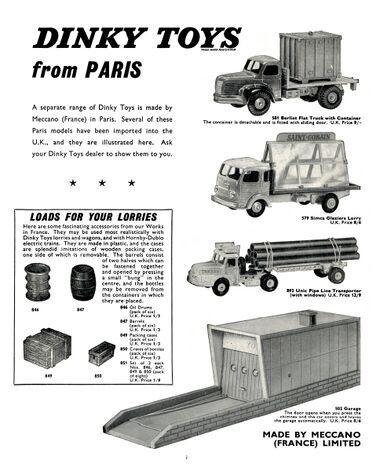 After Meccano France had solidified the Meccano brandname in France, it didn't take them long to start manufacturing locally. Initially, Meccano France started making Meccano (which was comparatively simple to produce) in Paris, but after the Bobigny plant was opened, this also became the company's manufacturing base for French Dinky Toys.

The local "Dinky" output usually modelled vehicles that were distinctly French or European. Where a UK buyer looking for a small diecast streamlined train would probably expect to find an "A4" ("Mallard-style") streamlined loco, their French counterpart would expect to be able to buy a model of a French diesel "autocar".

Some incorporations into the British range

Some of the French designs were so distinctively different to their British counterparts that they ended up being imported into the UK as official extensions of the main UK Dinky range. in the 1930s and early 1940s, these were usually marked with the suffix "z" added to their model numbers, to signify that they were French-produced, and to remove any numbering conflicts between the local UK-produced models and their French counterparts.

The MECCANO factory in Bobigny produces:
24 CARS PER MINUTE

It is, in fact, at the rate of four pieces every ten seconds that the "Dinky Toys" run off the production line. Every minute, twenty four “Arondes”, twenty four 2 CVs or twenty four “Vedettes”, examined, checked, tested, arrive in boxes of six at the end of the assembly belt.

And yet, you know enough about the models' fine reproduction and the fidelity to know that this level of output is not achieved at the expense of quality.

On the contrary, from the moment that a new "Dinky Toy" is "born", meticulous care oversees all research and stages of design.

When it has been decided to add a vehicle to the range of miniatures, the first step taken is a visit to the manufacturer, a visit which aims to obtain their authorisation as well as plans for the bodywork and possibly the chassis.

The artists in the design office study these documents, reduce them to the size of the "Dinky Toys" and draw up a plan which will make it possible to produce a meticulous model of the future vehicle in wood or plaster. The scale of this will vary from 1/43 to 1/49 in the case of passenger cars, and from 1/60 to 1/70 in the case of heavy goods vehicles.

After acceptance of the model – both by the manufacturer and by Meccano's management – ​​the design office, whose task has only just begun, draws up the outline of the mould.

A "patern-maker", highly specialized in this long and delicate work, then manufactures the steel mold intended for the foundries. A mold is formed of at least two elements, which are bright into contact at the time of molding. Some models require very complicated moulds, the many skilfully interlocking parts of which are controlled by angled shafts. More than a thousand hours of work are needed to manufacture a mould. It is, in fact, on the mould, on its “tweaked” details, on its perfect adjustment, that the precision and the exceptional finesse of reproduction of the “Dinky Toys” depend. This is also what makes them successful.

The metal used to make miniatures is called “zamak”. It is an alloy that contains 99% zinc, manganese and aluminum. To be robust, it must be die-cast.

The mold is mounted in a furnace and the zamak, melted at a temperature of 450°, is automatically injected under a pressure of approximately 25 kilos per square centimeter, thanks to a jet of compressed air. The small cars come out of the foundry at a rate of 5 to 7 pieces per minute, depending on the model. They cool quickly and are sent to the "deburring" workshop.

Each car is then taken individually. Workers file or grind the sharp edges produced at the joints of the mould, polish the roofs, and check the quality of the casting.

More than 12,000 "Dinky Toys", as shiny as silver, pass through their hands every day. Any part with the slightest defect is automatically discarded and sent back to the melt with the shavings and scrap metal. They will once again become zamak ingots and the cycle will begin again...

After deburring the "Dinky Toys" are painted. They are placed on slatted trays and painted with a spray gun: the underside first, then they are turned over like waffles to paint the top. Details are added using stencils (grilles, headlights, bumpers) or with a brush (license plate and lights). The enamels used for the decoration of the "Dinky Toys" are dried in an oven, on a metal conveyor belt which passes through a long tunnel heated to 125°.

While the bodies are turned out of the moulds, and are deburred and painted, other workshops are also busy: the bases are stamped and formed, and blackened; tyres are fitted onto the wheels (nearly 50,000 are needed per day!); axles are mounted on the bases, the wheels onto the axles ...

And all these various operations take place at the proper time at the comencement of the last assembly line. All along the conveyor belt are machines: some rivet the bases, others crimp the wheels and the little cars arrive finished, fresh and mint, at the "test track." The word is not too strong to designate the inclined plane on which the "Dinky Toys" roll for the first time. A final check, which is also the most exacting, and each car is placed in the individual yellow box that you know well. Now no-one will touch it again until it reaches your hands.

The cases containing the "Dinky Toys" are grouped in sixes in cardboard boxes and these are directed to the warehouse where they do not stay for long. The warehouse supervisor sometimes has just enough time to count them before they go to the Shipping Department, which guarantees their packing and departure to your usual supplier.

Collectors' items as well as toys, "Dinky Toys" are becoming increasingly popular with enthusiasts of all ages. This success is undeniably based on the concern for quality, precision and detail on which Meccano prides itself. Collectors are well aware of this, recognising "Dinky Toys" at first glance, without even having to check that the words "Dinky Toys" and "Meccano" appear under the base.

Three in the Continental Style

As many people know, Meccano Limited has a subsidiary company at Bobigny, near Paris. This company produces, among many other things, its own extensive range of Dinky Toys which are not normally available in Britain. However, we have obtained stocks of three outstanding Frrench-produced Dinky Toys which should appeal to all collectors and more especially to those enthusiasts, of whom there are a great number, who like to obtain as many varieties of Dinky Toys as they can.

Packed in the striking Dinky visi-pak, the new French Dinkies will be coming along shortly and will give collectors the chance to add a "Continental corner" to their layouts ...

Before I start to waffle on about the cars, I'm going to stick my neck out and disagree (probably) with many and at the same time pay a compliment to everyone from designers to packers at the French factory. It's my considered and humble opinion that Meccano France produce the finest die-cast toys on the market (I don't own shares in the company!) I have in my collection some seventy different manufacturers' models including the Rio and Solido – which I love – and have seen most of the others, but Dinky France get my vote.

... One reason for this, is I thnk that before the war, Frank Hornby and all who worked for him, took a real pride in everything they produced. For example – take a pre-war R.A.C. man not an inch high. No flash, every detail nicely painted, face, eyes, hands, cap detail, etc., now, after the war due largely to rising costs we find station staff, etc., – to the same scale as the R.A.C. man – with one colour paint overall plus a too liberal dab of pink for face and hands. At the French factory I believe they've retained the old "Hornby attitude" and thanks to this, we have a fine range of models, with generally, a fine finish. ...

The following 64 files are in this category, out of 64 total.