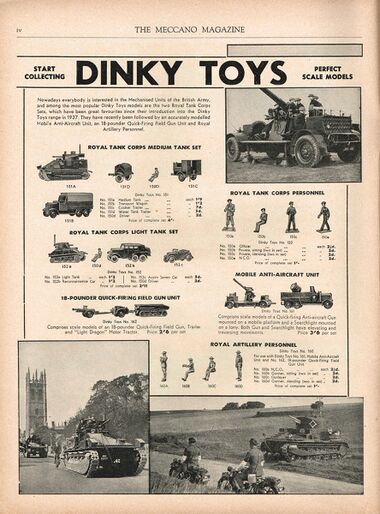 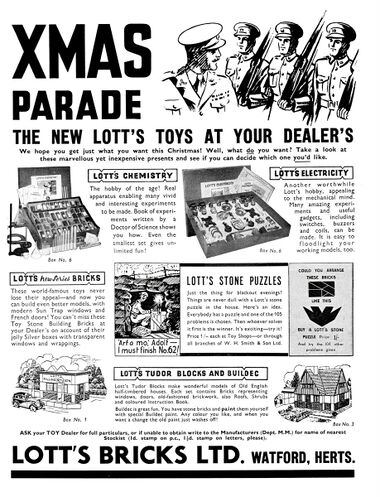 Some idea of the situation faced by toymakers can be gleaned form the evolution fo toy advertising during the period.

With the War looming, the second half of 1939 saw a sudden and notable increase in the number of military toys and models, including tanks, armoured vehicles and fighter planes, but also general-purpose military vehicles that people would have started seeing on the roads.

Advertising in 39-40 began to emphasise the usefulness of toys and construction kits as a "blackout hobby" to keep children occupied during the long blackout nights, and Micromodels also advertised their card models as being ideal things to work on when stuck in a bombshelter, as a Micromodels kit and part-built model, and all necessary tools, could all be comfortably fitted into a cigarbox. .

In 1940-41, as it became clear that metal toy toy manufacturing in particular was eventually going to have to be shut down, some of the larger manufacturers' advertising became more generic. Lines Brothers main adverts simply listed the company's main brand logos and brandnames in an attempt to keep them fresh in tpotetial buyers'minds until after normality was resumed. Juneero took out full-page adverts, promoting their products not just as construction toys but as useful tools for fixing up damaged household goods. Some manufacturers seemed to have gone through their warehouses and rediscovered old unsold stock – Meccano Ltd suddenly readvertised the Dolly Varden dollhouse that had been launched back in 1933 and had disappeared without trace almost immediately afterwards, and Bassett-Lowke similarly put out a "stock clearance" ad for the leftovers of their Nuways dollhouse furniture range, which had also not obviously been promoted or advertised since about ~1934.

As the War progressed, not only was metal toy production banned, but also the sale of metal toys, presumably to stop toymakers from sneakily continuing production and selling the results as pre-war stock. Wilson Lorries kits seemed to stay in production, presumably because the amount of metal was minimal, and the company would have been able to claim that ther other materials were essentially "off-cuts" left over form other manufacturing, that were worthless for almost anything else. Toy manufacturers kept advertising, even if they currently had nothing to sell, and in 1945 these adverts started to be more optimistic, promising that production would start really soon.

In the event, WW2 was followed by the Korean War. Korea had been liberated from the Japanese, and (like Germany) partitioned, with Russia taking nominal control over the North, and the allies controlling the South. The American determination that Korea wouldn't "go communist" led to a brutal suppression of suppression of groups with communist sympathies, including many of the anti-Japanese freedom fighters, who fled to the North. This created a highly polarised region that is still conflict-ridden today. Britain still had National Service and metal shortages after WW2, and the company's wrecked economy meant that a big chunk of dmenstc toy production was earmarked as "export-only", in an attempt to try to earn foreign currency and reduce the country's debts. Pelham Pupptets was founded by a demobilised Bob Pelham to provide work for hmaself and for other ex-servucepeople, and initially got by using war surplus materials and scrap and offcut material salvaged for skips. Once the company became successfuk, again a big chunk of production was earmarked as "export only".

The toy industry didn't get back onto its feet until the 1950s, after which technology had moved on, plastics were becoming dominant, and many existing toymakers found themselves with out-of-date skills, trying to compete with cheap internationally-manufactured plastic, and a new business environment where toy companies were being bought up not just by their national competitors, but by international corporations, some of whom were not even toy manufacturers, but were looking to diversify form other markets (such as breakfast cereals).

This category has the following 20 subcategories, out of 20 total.

The following 38 pages are in this category, out of 38 total.