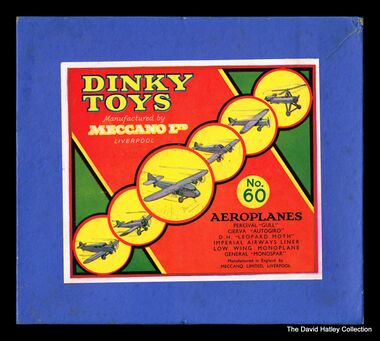 Although the Dinky Toys brand is usually associated with diecast toy cars (in ~1:43 scale), the brand expended a significant amount of effort in also producing ranges of diecast model aircraft.

The Dinky aircraft can be divided roughtly into three date ranges:

The planes produced up until the outbreak of World War 2 (and a little into the war, until around ~1941, when toy manufacturing halted)

At round this time, Meccano Ltd. was tring to use the Dinky brand to make collectable models of just about everything that they could think of, from animals to dollhouse furniture, and the planes probably seemed a logical next step after waterline models of ships.

Post-war, the brand restarted, and tried to pick up from where they'd left off, while also trying to have at least one large airliner in the Dinky Supertoys sub-brand.

With the release of the "Battle of Britain" film, Dinky took the opportuunity to start again, with a smaller range of physically bigger, more chunky, larger-scale planes that had higher play value. Starting with the idea that a toy Spitfire needed to be large enough to be clutchable in a tiny fist (and also needed to be a reasonable size if one wanted to be able to add extras, like a battery-powered motorised propellor), the rest of the range tended to also be single-seater fighter aircraft, light aircraft, or short airliners.