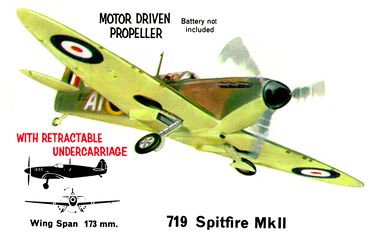 Dinky's chance to reinvent their range of model aircraft and start over from scratch appeared in the late Sixties with the release of Guy Hamilton's film, "Battle of Britain (1969)", which featured an all-star cast, a determination to stick to historical accuracy and realism, and some gripping scenes of aerial combat.

The back page of the October 1969 issue of Meccano Magazine duly showed a pair of sturdy new Dinky Toys with "Battle of Britain" film tie-in branding, a MkII Spitfire (No. 719) and a Junkers Ju 87b Stuka (No. 721), in a larger scale suitable for being gripped by a hand, with new features – transparent plastic cockpits, and retractable wheels and a motorised propellor for the Spitfire, and a droppable bomb for the Stuka that made a bang if you fitted it with a "cap".

These two new Dinkies then formed the basis of a brand new range of Dinky aircraft through the 1970s that consisted of fighter planes, light aircraft, and helicopters (plus the obligatory Supertoys airliner), replacing all the earlier Dinky aircraft. Like the later Dinky cars (with their "opening everything"), the emphasis was on features and play value.

The motorised Spitfire was joined by the Sea King helicopter play set (No. 724), which had an AA-powered set of main rotors, and also a manual winch, and came with a floating plastic Apollo space programme rentry capsule, which the Sea King could then retrieve.

Two more WW2 propellor-driven fighter planes were added, the Japanese "Zero" (No. 739) and the American P40 "Thunderbolt" (No. 734), and the 1976 catalogue suggests that these had electric motors too ... but the feature is no longer listed for the Spitfire, which has also been renumbered to No. 741.

The F4K Phantom jet fighter (725) had the ability to fire a largeish missile slung below its body. Other than this, the main bonus fature for most of the aircraft was a set of retractable wheels operated by a single lever.

Meant to be played with, and scaled as toys (rather than little scale models to be arranged and looked at) the new range had to focus on smaller aircraft, to keep their size manageable. The figher aircraft obviously had high play value (especially with their special features), but the toy Beechcraft S35 and CS5 light aircraft (710 and 715) didn't suggest a wide range of play scenarios ("I'm flying to a conference"), and got dropped. The Hawker Siddely Executive Jet (723) did at least have the "cool factor" of being a jet aircraft, and Dinky did a second version with camouflage, as a military VIP transport plane. The Hawker Harrier Jump Jet (722) had an instant recognition factor (and shiny silver thrust ports), and the US Navy Sea King Helicopter was joined by a German Bundesmarine version (736), that had an interesting dark red livery and swapped the space capsule for a figure to be rescued. A Bell Police Helicopter (732) gave a second helicopter "outline" and could be played with in conjunction with toy cars (for helicopter car chases).