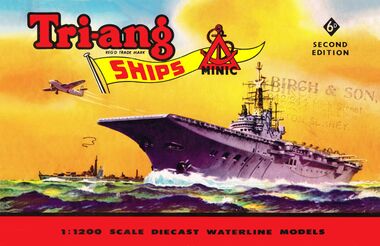 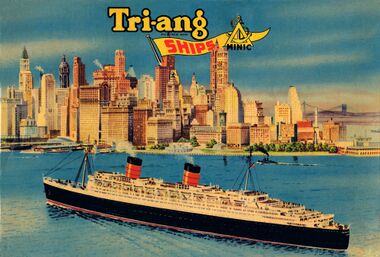 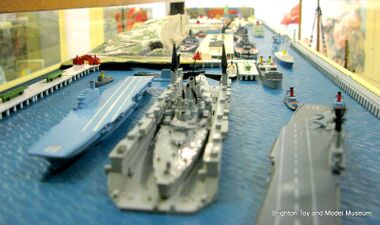 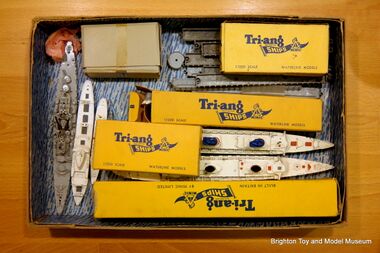 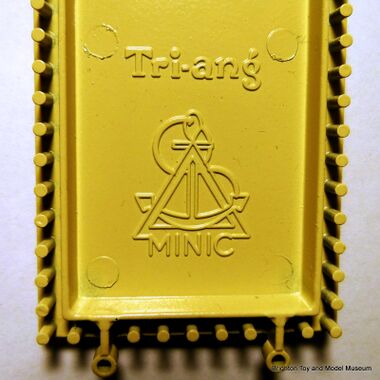 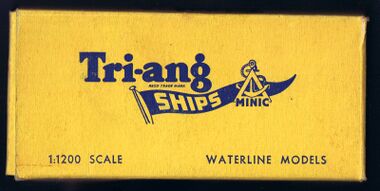 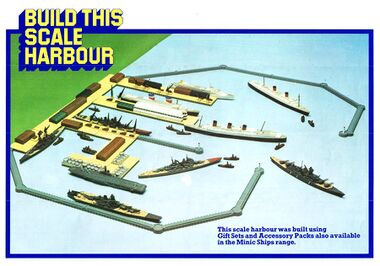 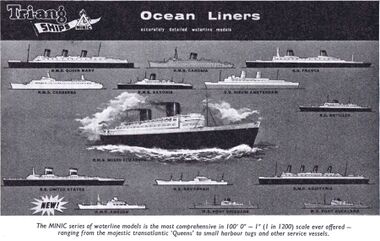 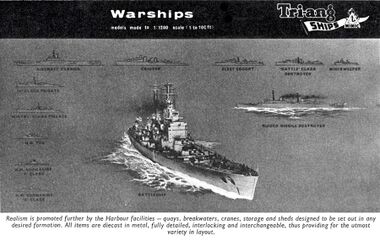 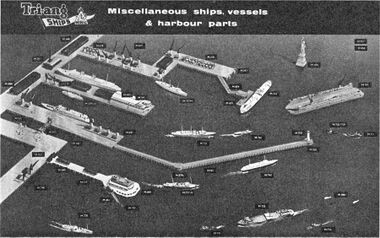 Although Tri-ang were by no means the first company to produce a set of cast waterline ship models at or around the scale of 1:1200 – notable earlier ranges included Bassett-Lowke, Tremo and Dinky – the Tri-ang MINIC Ships range was arguably the most successful product range of its type after World War Two. As well as a wide range of nicely-painted models, the accessories ended up including harbours and pier sets and even a very small scale-sized whale, and the retailer accessories included a model representing the port of Dover, with white cliffs and tiny sets of 1:1200 train track, and even a tiny train.

These accurately detailed, 1:1200 scale waterline models were only available in the shops from about 1958 to 1964, and thus had a comparatively short life. However, from the collector’s point of view, production figures must have been high since, coupled with the factor of their comparatively low play value (they could not be raced like Dinky Toys) they have survived in reasonably large numbers in good condition.

Six sales catalogues were produced between 1959 and 1960 and are nowadays quite hard to find. No single catalogue shows the full range, since additions, deletions and alterations were regular occurrences.

Triang Ships are an exciting new series. Scale Docks, an Ocean Convoy or Fleet Manoeuvres – all can be reproduced in thrilling miniature. Each model has a heavy diecast hull, bringing out in precise detail the lifeboats, bollards, portholes and anchors. Masts, cranes, and other projecting parts are moulded in resilient plastic for strength and safety. New models are continually being built and will be introduced at frequent intervals

"Minic Ships" were reintroduced in 1976 as Hornby-branded products, and these are known as the "second issues". They were painted in slightly different colours, had red plastic bases, and wheels were put on their undersides. They did not sell well and are not as collectable as the original "first" series. The range was limited to the Queen Mary, Queen Elizabeth, United States, Canberra, Vanguard and Bulwark, with some new models in the shape of the Missouri, Bismarck, Scharnhorst and Yamato.

Presentation sets were also produced, including some harbour parts and accessories. All second issues have "HONG KONG" stamped on the base.

The following 66 pages are in this category, out of 66 total.

The following 69 files are in this category, out of 69 total.